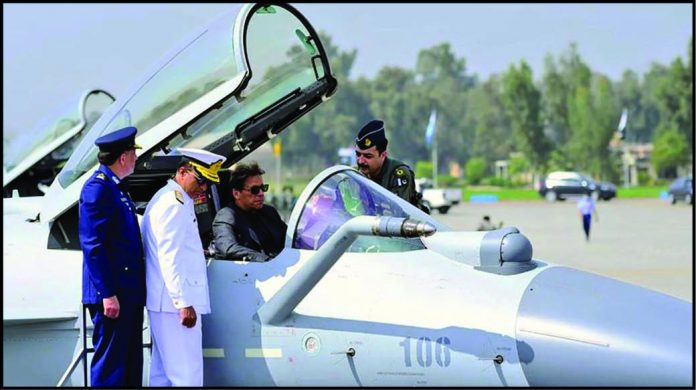 Islamabad (AP): Pakistan’s air force officially inducted its first batch of Chinese-built J-10C fighter jets on Friday, holding a ceremony in Islamabad with officials from both countries.
Several of the jets flew overhead as Prime Minister Imran Khan welcomed the purchase, made for an undisclosed amount. Pakistan hasn’t said how many aircraft were bought in the deal, though authorities had earlier spoken of up to 25 jets. China is a longtime ally of Pakistan and has sold it military aircraft before.
The ceremony comes a day after Pakistan said an unarmed surface-to-surface missile launched from India landed inside the country, damaging a wall in a residential area but causing no casualties.
Following the incident, Pakistan on Friday summoned an Indian diplomat and lodged a protest, according to a statement released by the Foreign Ministry.
Without naming neighboring India, Khan said in his Friday speech that the Chinese-built planes would play an important role in rectifying a “security imbalance’’ in the region.
Later Friday, India’s defense ministry issued a statement saying that the missile that ended up in Pakistan was fired by accident due to a technical malfunction during a “routine maintenance’’ on Wednesday. It said the government ordered an investigation.
“While the incident is deeply regrettable, it is also a matter of relief that there has been no loss of life due to the accident,’’ India said. Pakistan and India have a history of bitter relations. They have fought three wars _ two of them over the disputed Himalayan region of Kashmir, which is divided between the two but claimed by both in its entirety.