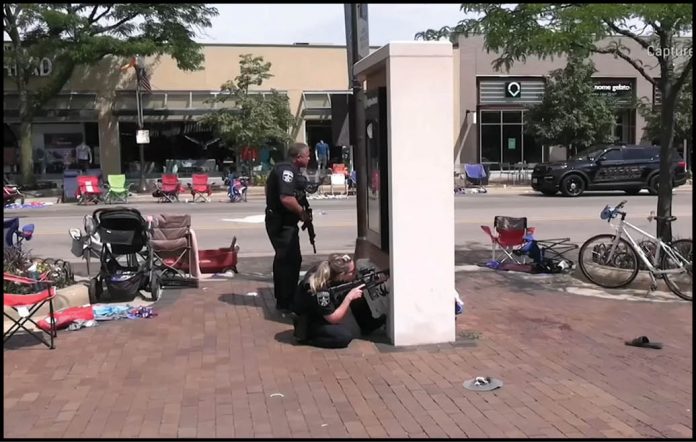 Highland Park, Ill. (AP): A man charged Tuesday with seven counts of murder after firing off more than 70 rounds at an Independence Day parade in suburban Chicago legally bought five weapons, including the high-powered rifle used in the shooting, despite authorities being called to his home twice in 2019 for threats of violence and suicide, police said.
Lake County State’s Attorney Eric Rinehart said the suspect, if convicted of the first-degree murder charges, would receive a mandatory life sentence without the possibility of parole. He promised that dozens more charges would be sought. A spokesman for the Lake County Major Crime Task Force said the suspected shooter, who was arrested late Monday, used a rifle “similar to an AR-15’’ to spray more than 70 rounds from atop a commercial building into a crowd that had gathered for the parade in Highland Park, an affluent community of about 30,000 on the Lake Michigan shore.
A seventh victim died of their injuries Tuesday. More than three dozen other people were wounded in the attack, which Task force spokesman Christopher Covelli said the suspect had planned for several weeks. The assault happened less than three years after police went to the suspect’s home following a call from a family member who said he was threatening “to kill everyone’’ there. Covelli said police confiscated 16 knives, a dagger and a sword, but said there was no sign he had any guns at the time, in September 2019.
Police in April 2019 also responded to a reported suicide attempt by the suspect, Covelli said.
The suspect legally purchased the rifle used in the attack in Illinois within the past year, Covelli said. In all, police said, he purchased five firearms, which were recovered by officers at his father’s home.
The revelation about his gun purchases is just the latest example of y oung men who were able to obtain guns and carry out massacres in recent months despite glaring warning signs about their mental health and inclination to violence.
Illinois state police, who issue gun owners’ licenses, said the gunman applied for a license in December 2019, when he was 19. His father sponsored his application.
At the time “there was insufficient basis to establish a clear and present danger’’ and deny the application, state police said in a statement.
Investigators who have interrogated the suspect and reviewed his social media posts have not determined a motive or found any indication that he targeted victims by race, religion or other protected status, Covelli said.
Earlier in the day, FBI agents peeked into trash cans and under picnic blankets as they searched for more evidence at the scene. The shots were initially mistaken for fireworks before hundreds of revelers fled in terror.
A day later, baby strollers, lawn chairs and other items left behind by panicked parade goers remained inside a wide police perimeter. Outside the police tape, some residents drove up to collect blankets and chairs they abandoned.
David Shapiro, 47, said the gunfire quickly turned the parade into “chaos.’’
“People didn’t know right away where the gunfire was coming from, whether the gunman was in front or behind you chasing you,’’ he said Tuesday as he retrieved a stroller and lawn chairs.
By Michael Tarm, Kathleen Foody And Stephen Groves