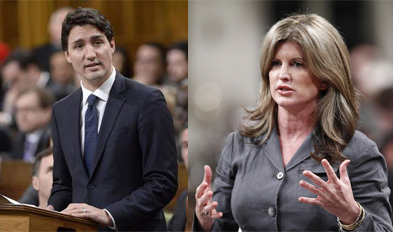 Ottawa: Canada’s 42nd Parliament got down to business Monday, with the often-promised new era of civility sounding a lot like a brittle rehash of the federal election campaign.

Ambrose issued a scathing critique of the new Liberal government’s throne speech, which was itself a recap of Trudeau’s election promises.

Echoing the same criticisms levelled throughout the election campaign, she called the Liberal plan a recipe for intrusive government that thinks it knows best how to spend Canadians’ money.

“What we did hear was a recipe for big government and big spending. So the question that every taxpayer wants us to ask this government is: where will the money come from to pay for all of this?” Ambrose told the House of Commons.

“It only comes from one place and that’s out of the pockets of Canadians.”

Treasury Board President Scott Brison questioned how Ambrose could make such an accusation when she had been a minister in what he termed “one of the biggest spending governments and the most wasteful governments in Canadian history.” He noted that the previous Conservative government added $150 billion to the national debt.

The exchange prompted Ambrose to observe: “I think it’s been 25 minutes and the sunny ways are over.”

But Ambrose was no slouch when it came to partisan shots.

She took aim at Trudeau’s vow to withdraw Canadian fighter jets from the allied bombing campaign against Islamic radicals in Syria and Iraq. While the Americans, French, British and Germans are all ramping up their efforts, Ambrose accused Trudeau of believing that “posing for selfies at international conferences is a better use of his time.”

“Canada isn’t back. Canada is backing away,” she charged.

Mulcair struck a more conciliatory tone, promising to work with the government “when our values and our policies coincide.” But he took the opportunity to recycle a number of planks from the NDP platform, urging Trudeau to hike taxes on large corporations and introduce a $15-an-hour federal minimum wage.

As he did during the campaign, Mulcair criticized the centrepiece of the Liberal platform, the plan to cut taxes for Canadians in the $49,000-$89,000 income tax bracket while raising taxes on the wealthiest one per cent, as smoke and mirrors. The plan will actually benefit wealthy Canadians the most and do nothing for 70 per cent of taxpayers, he said, urging Trudeau to expand the tax cut to those in the lowest income tax bracket.

For his part, Trudeau essentially repeated the throne speech, in slightly greater detail. But he took a veiled shot at the previous Conservative regime, which campaigned on hot button identity issues, including a proposed ban on Muslim women wearing the face-covering niqab during citizenship ceremonies.

Extolling the virtues of diversity, Trudeau said some Canadians have, at times, “been the target of hateful words and deeds, simply because they look different, speak a different language, choose to wear different clothes or practice a different faith.” But he argued that “intolerance stands little chance” in Canada and pointed to the recent election as proof that Canadians reject attempts to pit one group against another.