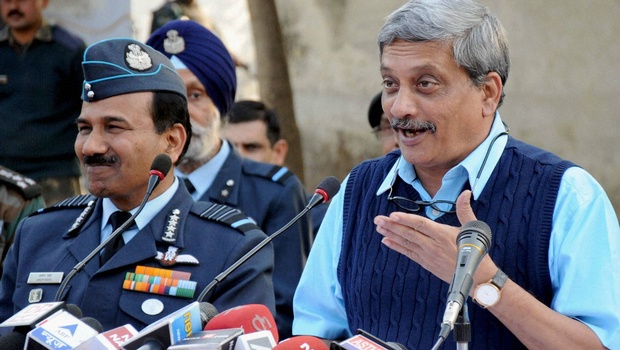 Parrikar said the battle against the terrorists who sneaked into the sprawling base before dawn on Saturday effectively ended after around 36 hours (at 7.30 p.m. on Sunday) and that combing operations going on since then were “for safety purposes”.

“It started at 3.30 a.m. when (IAF) Garud force engaged the terrorists… At 7.30 p.m. (on Sunday), they (terrorists) were finished. So it is about 36 hours,” Parrikar said when asked how effective the counter offensive of the security forces was.

Parrikar told the media after visiting the base that combing operations were still going on but “this is only for safety purposes” and that no more terrorists were believed hidden in the Indian Air Force complex.

Some gaps led to security lapses, the minister said. He did not elaborate. “What is worrying is how they (terrorists) entered the base.”

“The things that we have found so far, there are some indications some of the material is made in Pakistan.

“Let the NIA (National Investigation Agency) investigate it, everything about whom they were linked to and who sent them will emerge,” he said of the suspected links of the terrorists to Pakistan.

The NIA, he said, had “initial leads, where they (terrorists) have come from, how they have come”.

Pakistan Prime Minister Nawaz Sharif on Tuesday promised his Indian counterpart Narendra Modi that Islamabad will take “prompt and decisive action” against the terrorists linked to the attack.

Sharif, who telephoned Modi from Sri Lanka, gave the assurance after New Delhi provided “specific and actionable information” to Islamabad regarding the terrorists. Modi underlined the need for Pakistan to take “firm and immediate action” against organisations and individuals responsible for the audacious attack.

The Sharif-Modi conversation followed the killing of all six terrorists in Pathankot, which is home to one of the biggest IAF bases.

Parrikar said body parts of the last two terrorists killed were found at two places. He said these would go for DNA tests.

Parrikar visited the Pathankot base on Tuesday along with the chiefs of the army and air force. The head of the NIA also visited it separately.

“Combing operations are (still) going on,” he said. “This is only for safety purposes.”

The minister said the body of one of the terrorists still had a suicide vest, with a grenade sticking out.

“I am very, very clear that they (our officers) should not take any risk,” he said, recalling how a National Security Guard (NSG) officer lost his life earlier while trying to reportedly shift a similar body.

Parrikar said the entire operation was “a very difficult” one but it had been accomplished without compromising not just the strategic assets but also even the buildings.

He said barring one building where the terrorists took shelter, no other building was even damaged because the security personnel cornered the raiders in a corner of the base.

The Pathankot Air Force Station, where a MIG-21 Bison squadron and MI-35 attack helicopters are based, is spread over 1,900 acres. Over 1,500 families live inside the campus which also has a school, a hospital and a market.

He said the terrorists had AK-47 rifles, pistols, Swiss knives, commando knives besides 40-50 kg of bullets. They also had improvised mortars. “They had high quality explosives.”

The Pathankot attack came after Modi and Sharif met on Christmas Day in Lahore when the Indian leader, while flying home from Kabul, dramatically made a two-hour halt.

In Kerala, NSG commando Lt. Col. E.K. Niranjan, killed during mopping up operations at the air base on Sunday, was cremated in Elumbulsherry village in Palakkad district.

Hundreds of people stayed awake through the night after his body was brought here on Monday evening.