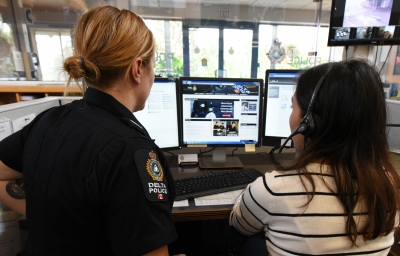 Officers doing proactive patrols in the Watershed Park area have identified a person of interest in an ongoing investigation.

On the afternoon of August 17, Delta Police were in the 11100 block of Kittson Parkway doing patrols regarding an ongoing investigation involving the dumping of raw meat in Watershed Park. Police had advised the public earlier in August about a number of instances of found raw meat, and had increased patrols by both officers and volunteers due to the public’s concerns.

Around 2:05 pm on August 17, police entered the park and identified a person of interest in this matter. Contrary to some reports on social media, police have not arrested anyone in relation this investigation.

“Meat seized from previous occasions is still undergoing testing,” says Cris Leykauf, spokesperson for Delta Police. Until police have further information regarding whether the meat was tampered with, or toward what end it was being left in the park, she cannot speculate on possible consequences for these actions.

As of the evening of August 16 no dogs had been reported as being poisoned in relation to the dumped meat.

“Our officers have also taken the step of inquiring within the veterinary community regarding if they have seen any spikes or trends in animal poisoning in the Metro Vancouver area. There does not appear to be any trend in this regard which should alarm animal owners,” she says.

The investigation remains ongoing, and police await the results of testing. It is unknown why the meat was being dumped in Watershed Park.