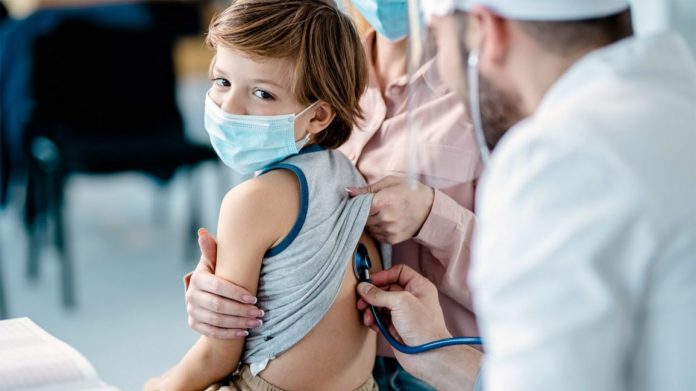 Ottawa: Pfizer-BioNTech has asked Health Canada to approve the first COVID-19 vaccine for children aged five to 11 years old.
The vaccine was developed in partnership with Germany’s BioNTech and is now marketed under the brand name Comirnaty. It was authorized for people at least 16 years old last December, and for kids between 12 and 15 in May.
Pfizer already submitted clinical trial data for its child-sized dose to Health Canada at the beginning of the month. The company said the results were comparable to those recorded in the Pfizer-BioNTech study in people aged 16 to 25.
Health Canada said it will prioritize the review of the submission, while maintaining high scientific standards for safety, efficacy and quality, according to a statement from the department.
“Health Canada will only authorize the use of Comirnaty if the independent and thorough scientific review of all the data included in the submission showed that the benefits of the vaccine outweighed the potential risks in this age group,” the statement read.
The doses are about one-third the size given to adults and teens age 12 and up.
As soon as the regulator gives the green light, providers will technically be able to start offering the COVID-19 shot to kids, though new child-sized doses might need to be procured.
Pfizer has delivered more than 46 million doses to Canada to date, and an analysis of the available data on administration from provincial and federal governments suggests there are more than enough Pfizer doses already in Canada to vaccinate kids between five and 11 years old.
But simply pulling smaller doses from the vials Canada already had stockpiled across the country may not be advised, chief public health officer Dr. Theresa Tam said at a media briefing late last week.
“We also understand from Pfizer that this actual formulation has shifted, this is a next generation formulation, so that is something that needs to be examined by the regulator,” Tam said Friday.
Canada signed a new contract with Pfizer for pediatric doses last spring.
The Pfizer-BioNTech vaccine has also been tested on children as young as six months old. Topline data for children under five years old is expected as soon as the end of the year.
Health Canada said it expects to receive more data for review from Pfizer for younger age groups, as well as other manufacturers for various age ranges in the coming months.
The Public Health Agency of Canada has noted rare incidents of myocarditis, an inflammation of the heart muscle, after receiving an mRNA vaccine like Pfizer-BioNTech and Moderna.
As of Oct. 1, Health Canada has documented 859 cases associated with the vaccines, which mainly seem to affect people under 40 year old. On balance, the risk appears to be low, according to Tim Sly, a Ryerson University epidemiologist with expertise in risk management.
“Of course, no one considers any complication in a child to be acceptable, and a tremendous amount of caution is being taken to look for and identify all problems,” said Sly in a recent email exchange with The Canadian Press.
COVID-19 infection also produces a very high risk of other cardiovascular problems, he said.
Aside from protecting kids against more serious symptoms of COVID-19, the vaccine would also reduce the risk of a child passing the virus on to a vulnerable family member and make for a better school environment with less stress about transmission.
Once the vaccine is approved for kids, the National Advisory Committee on Immunization will weigh in on whether the benefits of the shot outweigh potential risks for young children.