Asian Journal
Home News PM to meet Trump in the ‘next 30 days or so’ to... 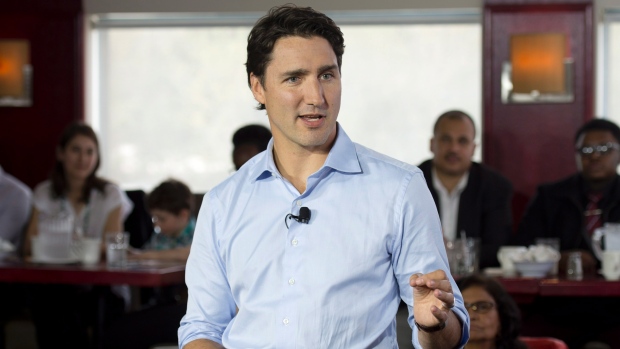 WASHINGTON: Prime Minister Justin Trudeau will meet the new U.S. president within the next several weeks, as the incoming American administration talks to its northern and southern neighbours about a revised North American Free Trade Agreement.

A spokesman for Donald Trump confirmed the upcoming discussions as he held his first daily White House briefing Monday and took questions on trade, counter-terrorism and a dispute over him making misleading statements.

The first NAFTA talks could take place in the U.S., Sean Spicer suggested. He appeared to indicate the leaders would visit Trump. However, in Canada, several officials said specifics of a meeting had yet to be nailed down.

“(Trump) discussed on the phone with both leaders his desire to reform (NAFTA),” Spicer told reporters. “His goal was to have that discussion when they come in person.”

Spicer said the meetings would happen soon: ”Over the next 30 days or so.”

That multinational agreement had been a pillar of U.S. foreign policy under two administrations, an effort to set American-designed trade standards in China’s geographic neighbourhood, and Canada was also a party. However, the deal drew fire from left and right in the last U.S. election and now appears dead.

Another subplot of the day featured a spat over basic honesty. Spicer admitted he misled reporters on the weekend by exaggerating the number of Washington subway riders on the day of Trump’s inauguration.

He said it was an honest mistake and that he had received bad numbers. Spicer did continue to insist that Trump’s inauguration crowd was the largest of all time _ but he clarified that the claim included live participants, TV viewers and people who watched online.

The Canadian government heard a reassuring message in Calgary. A presidential adviser attended a federal cabinet retreat to say Canada need not be “enormously worried” about trade. Stephen Schwarzman, who leads the president’s Strategic and Policy Forum, said the new administration had an “unusually positive” view of Canada.

“There may be some modifications, but basically things should go well for Canada in terms of any discussions with the United States,” said Schwarzman, CEO of the Blackstone Group investment firm.

The Canadian government has been hoping to escape the ire that Trump directed at other countries during the campaign _ he almost never mentioned Canada and in fact brushed off the idea of a northern border wall when asked about it.

The Trudeau government has hinted it could even seek to preserve a one-on-one deal with the U.S., should NAFTA fall apart.

A Trump-friendly U.S. lawmaker Monday suggested that’s exactly what he’d prefer _ a one-on-one deal with Canada. Chris Collins, who was the congressional liaison between lawmakers and Trump’s presidential transition team, said he favours dealing with Canada and Mexico separately.

He made clear he was not speaking for the administration, and said it’s unclear what approach Trump will favour. But the New York Republican told CNN: ”Our relationship with Canada has nothing to do with our relationship with Mexico. They should not be mixed together. Canadians pay the same wages. They treat their workers with respect.”