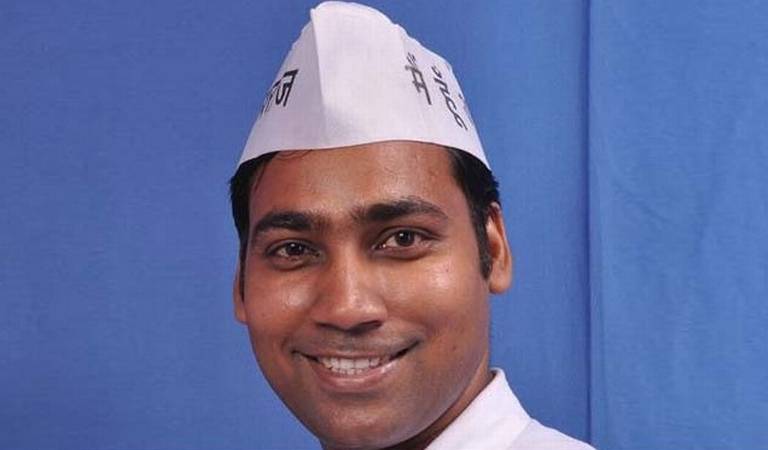 New Delhi, July 9 (IANS) In an embarrassment to the Aam Aadmi Party in Delhi, party legislator Manoj Kumar was arrested on Thursday on charges of cheating and forgery.
The AAP termed the arrest “political vendetta” and a “deliberate act” of the Narendra Modi government even as the BJP and the Congress took potshots at the party over the issue.
Manoj Kumar, elected from Kondli constituency in east Delhi, was taken into custody in cases of alleged land grabbing, cheating and assault and arrested after questioning, police said.
Police said Manoj Kumar was taken to the New Ashok Nagar police station for questioning. He faces seven cases in all and an FIR in the land grab case was filed about a year back and in the assault case in May this year.
The AAP legislator was later presented before Additional Chief Metropolitan Magistrate Saurabh Pratap Singh, who sent him to two-day police remand as against police request for seven-day custody.
AAP leaders reacted sharply to Manoj Kumar’s arrest, accusing Delhi Police of being “selective” in arrests.
AAP spokesman Deepak Bajpai accused the BJP-led central government of “trying to implement the Gujarat model of policing” in Delhi.
“There was no notice or summon issued before Kumar was detained. Police suddenly arrested Kumar in a year-old case. This has been done just because we are opposing the corrupt practices of the BJP government at the centre. But we are ready for all this,” Bajpai told IANS.
Bajpai alleged that the BJP was in the “habit of suppressing its rivals”.
“Why are Delhi Police not taking action against BJP leaders – Uma Bharti, Ram Shanker Katharia – who have serious criminal charges against them,” he asked.
Another AAP leader Nagendra Sharma said why no action was taken against BJP parliamentarian Ramesh Bidhuri who has criminal case against him.
“What happened to this FIR against BJP MP? Why no arrest? Delhi Police impartiality under severe doubt,” Sharma tweeted.
Manoj Kumar’s laywer H.S. Phoolka, also a member of AAP, said the legislator’s arrest was “illegal” and a “political vendetta” against the party.
Delhi BJP president Satish Upadhyay took potshots at the AAP over the arrest and said the ruling party’s “true face had been exposed”.
“Police must have taken all legalities into consideration. This is a serious issue,” Upadhyay said, adding that people would realise what kind of legislators they have chosen.
The Congress also targeted the AAP over Manoj Kumar’s arrest, saying people were feeling cheated. “The common man in Delhi feels cheated; it is a cause of concern,” party leader Arvinder Singh Lovely said.
Manoj Kumar is the second AAP MLA to be arrested by Delhi Police.
The then Delhi law minister Jitender Singh Tomar was arrested in June in connection with his alleged fake educational degrees. He subsequently resigned from his post and is currently behind the bars.