Delta: The quick arrival of police, equipped with and trained in the use of tourniquets and pressure bandages, is confirmed to have save a Ladner man’s life recently.

Delta Police patrol officers have been outfitted with tourniquets since 2010. This is not the first time officers have had to call upon that training in an emergency situation. 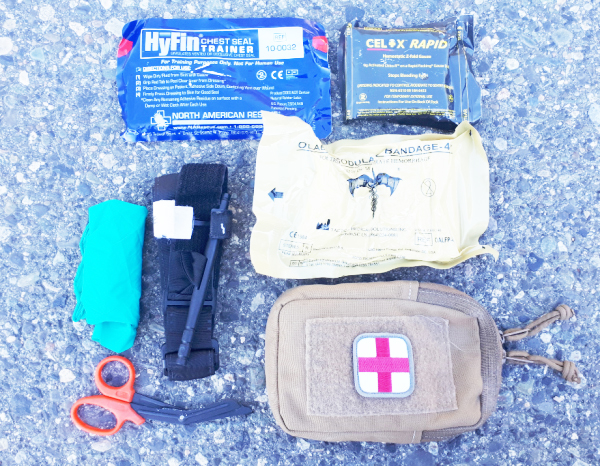 “Our officers arrived on scene within six minutes, to find a man lying on his front steps, bleeding profusely,” says Chief Neil Dubord. “At that point the situation was dire, as the man was already grey in colour, with his breathing shallow and labored.”

Sergeant Sarah Swallow and Constable Brad Mear observed several lacerations to the man’s arm, which were vigorously bleeding. Recognizing the life-threatening nature of the situation officers requested emergency health services to arrive at haste, and began immediately treating him.

Constable Mear successfully applied his tourniquet to the victim’s right arm, which stopped the bleeding. However, the man’s vital signs continued to be unstable.

Meanwhile another officer arrived on scene and applied an Israeli bandage to the wound for secondary pressure and protection, as the wound was very severe. Officers moved the man into the entryway of the home to keep him warm, and Sgt. Swallow kept talking to him while monitoring his vital signs.

Paramedics arrived shortly thereafter and transported the man to hospital, where he was immediately admitted for surgery. The doctor who treated the man confirmed that his injury was life threatening, and praised the quick and effective police emergency first aid for saving the man’s life.

“I’m very proud of the efforts of our officers. We do a lot of training here, because our officers need to be prepared to deal with a wide range of issues,” says Chief Dubord. “I’m so pleased that preparation has paid off, resulting in a man’s life being saved.”

Delta police officers on the former Municipal Emergency Response Team first began using tourniquets in 2008. They then encouraged introduction of this first aid tool to patrol members in 2010, which was also the first time it was used by the department to help save a life. Since 2012 all front line police officers in Delta have been issued tourniquets and are trained in their use.

The injured man has since been released from hospital.