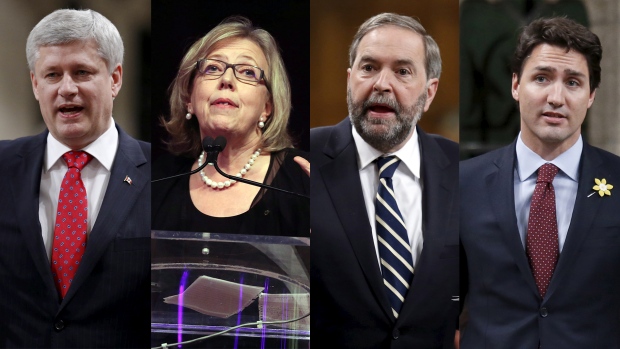 The Canadian Press
OTTAWA: Federal political leaders are staying out of the spotlight today as they get ready for the first debate of the election campaign, taking place Thursday night in Toronto.
The debate, to be hosted by Maclean’s magazine, will be the first opportunity for four of the five leaders to go head-to-head on a number of key issues, particularly the sputtering Canadian economy.
Conservative Leader Stephen Harper, NDP Leader Tom Mulcair, Liberal Leader Justin Trudeau and Green party Leader Elizabeth May will all take part.
Conservative spokesperson Kory Teneycke says his team is well aware Harper will be the focal point of most of the attacks and questions coming from the other party leaders.
He says the prime minister is “quite prepared to defend” the government’s economic record, which has been come under fire on the campaign trail with the Canadian economy contracting in the first quarter of 2015.
Teneycke says Trudeau will exceed expectations “if he comes on stage with his pants on” _ a jab to which the Liberals did not respond.