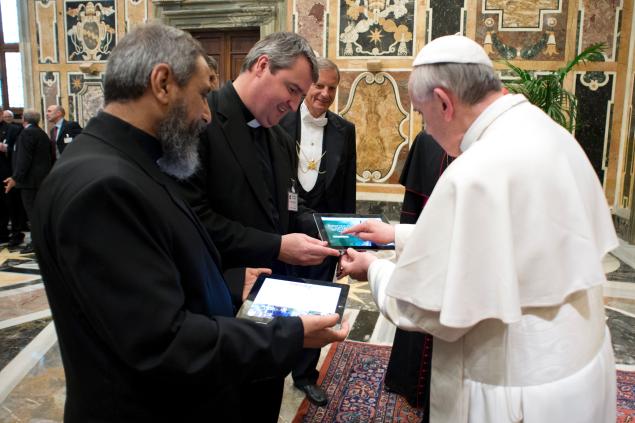 Montevideo, March 30 (IANS/EFE) An auction house in Uruguay’s capital Montevideo hopes to get at least $40,000 for an iPad used by Pope Francis, with the proceeds to be donated to a Catholic high school in the northwestern city of Paysandu.
“There is interest not only in our country,” auctioneer Juan Castells said. “Recently, we received calls from around the world. The buzz has been great.”
The device to be auctioned on April 14 was given by Pope Francis to Uruguayan priest Gonzalo Aemilius, who visited the Vatican.
The friendship between the two Catholic priests dates to when the future pope, Jorge Bergoglio, was archbishop of Buenos Aires and learned about an educational institution that Aemilius ran in Montevideo.
During Aemilius’s visit to the Vatican, Francis gave him his iPad “to do with whatever he considered appropriate”, Monica Olivelli, principal of the Liceo Francisco school, said.
The new high school, promoted by three Paysandu families and local church authorities, is modelled on the one Aemilius runs in Montevideo and was inaugurated this year.
To help finance the project, Aemilius donated the iPad Francis gave him.
The Liceo Francisco currently has 50 students from low-income families. “The idea is to add 50 new students each year, in addition to those already enrolled,” Olivelli said.
Proceeds from the iPad auction will be used to expand the facility, making room for more students, and to build a multi-sport centre.
The device works and has engraved text that reads “Su Santidad Francisco” and “Vatican Internet Service,” with the date March 2013, the auction house said.
“This is the iPad the Pope was using regularly and, besides, it has a certificate of authenticity from the Vatican itself,” Castells said.
The market value of a similar iPad is around $660.
The iPad that belonged to Pope Francis will not be sold if the bids do not reach the $40,000-mark, Olivelli said.