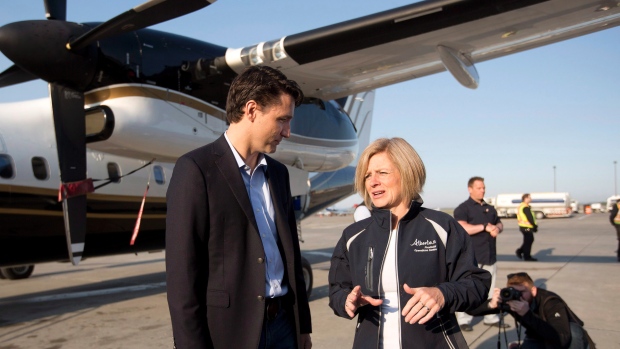 By Dean Bennett, THE CANADIAN PRESS

FORT MCMURRAY, Alta.: Prime Minister Justin Trudeau has landed in Fort McMurray after shaking hands with the man who led the fight against a fierce fire that forced the city’s entire population to flee.

The prime minister was presented with his own Fort McMurray fire jacket by Chief Darby Allen on the tarmac of the Edmonton International Airport prior to a flight to the oilsands city, about 435 kilometres to the northeast.

The flight took Trudeau over a patchwork of devastated neighbourhoods where some homes still stand, while others have been burned to their foundations.

The forest surrounding the airport, trees looking like little more than used match sticks, is charred right up to the tarmac and the ground has been left blackened.

After landing, Trudeau got on a military helicopter for a first-hand look from the air. He is also to tour a damaged neighbourhood on the ground and meet with first responders and volunteers.

“I heard there were situations and peculiarities in this fire that give us pause for reflection on how we move forward,” Trudeau told Allen.

“I’m very, very interested in not just what we manage to do to get through this one, but what we can do around minimizing the impacts of the next one _ because it will come.”

More than 80,000 residents had to evacuate their homes May 3 as the flames carved a destructive path through the city. Officials say more than 2,400 homes and other structures were destroyed and another 530 were damaged, but 25,000 were saved.

Accompanying Trudeau are Alberta Premier Rachel Notley and some federal cabinet ministers, who are part of a special committee that is to co-ordinate aid and reconstruction efforts in the city. Melissa Blake, mayor of the Regional Municipality of Wood Buffalo, is also present.

It’s expected Notley will press the prime minister for enhanced employment insurance benefits for the Edmonton area as a consequence of the wildfire. Ottawa is already fast-tracking EI claims from displaced Fort McMurray workers.

Trudeau and Notley are to hold a news conference in Edmonton later in the day.

Allen said having the prime minister visit is a morale boost.

“Right now the residents aren’t there, but there are hundreds and hundreds of emergency workers. I think they’ll get a lift from that,” he said.

“We’ve been working hard for the last two or three days on this re-entry plan (for residents). We’ve got a few challenges around that.”

Blake said it is critical for Trudeau to tour the burned neighbourhoods.

“I’m personally very appreciative that he’s coming in to survey it first hand, because once you see it, you know just how daunting the work will be, but how important it is to make it back to what it was before.”

Alberta MP Kent Hehr, who heads the special committee, said it’s a personal trip for him as well. He said it’s important to go home and show people that the federal government will be there for them in the reconstruction.

“It’s very difficult for me as an Albertan,” said Hehr, who representing a Calgary riding.

“I used to play in the Alberta Junior Hockey League where we had the opportunity to go up and play the Fort McMurray Oil Barons when I was a kid,” he said.

Alberta senior wildfire manager Chad Morrison is getting his second look at the fire. He said crews just couldn’t stop the fire from torching homes, even though they got on it quickly.

“We were throwing everything at it and it wasn’t phasing it. Mother Nature was going to take it and go for a roll.”

The fire is now more than 2,400 square kilometres in size and has moved away from the city. It is expected to burn in forested areas for many more weeks.