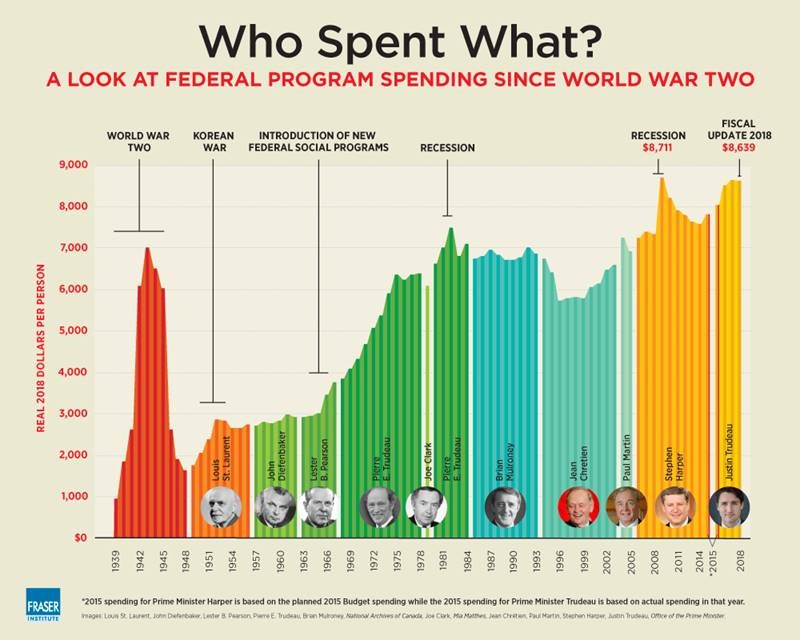 Vancouver: Prime Minister Justin Trudeau has now recorded the two highest levels of per person government spending in Canadian history, outside of times or war or recession, finds a new study released by the Fraser Institute, an independent, non-partisan Canadian public policy think-tank.

“Wars and recessions clearly affect government spending, but to see this high level of peacetime spending when the economy is also growing could spell trouble for Canadian taxpayers in the future,” said Jason Clemens, executive vice-president of the Fraser Institute and co-author of Prime Ministers and Government Spending, 2019.

The study, which tracks annual per person program spending (adjusted for inflation) by prime ministers since Confederation, finds that spending this year ($8,639 per Canadian) is only $72 below the all-time record set by Prime Minister Stephen Harper in 2009 ($8,711 in 2018 dollars) during the global recession.

Consequently, two of the three highest-spending years on record—2017 and 2018 – are within Prime Minister Trudeau’s tenure.

In addition, Prime Minister Trudeau also presided over the fourth-largest average annual increase (3.1 per cent) in per person program spending since the Second World War, behind only Pierre Trudeau (4.5 per cent), Lester Pearson (5.3 per cent) and Louis St. Laurent (7.0 per cent).

“The past few years have seen rapid and historic increases in deficit-financed government spending in Ottawa, at a time when the economy is growing,” Clemens said.

“Higher spending often leads to higher deficits and more debt that ultimately must be paid by taxpayers, which is why current spending levels represent a burden to current and future taxpayers.”