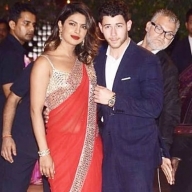 Mumbai/New York: Actress Priyanka Chopra, 36, and pop singer Nick Jonas, 25, are engaged after two months of dating, the US media has reported amidst news that the former Miss World has opted out of Bollywood film “Bharat” for a “very special” reason.

On Friday, “Bharat” director Ali Abbas Zafar announced on Twitter that Priyanka is no longer going to be a part of the Salman Khan-starrer movie, and that the decision came in “the Nick of time”, making a clear pun on her relationship with Jonas.

“Yes, Priyanka Chopra is no more part of ‘Bharat’ and and the reason is very very special, she told us in the Nick of time about her decision and we are very happy for her… Team ‘Bharat’ wishes Priyanka Chopra loads of love and happiness for life,” Zafar tweeted.

While neither Priyanka nor Jonas have made an official announcement, US media widely reported about their engagement.

People.com quoted a source as saying the couple got engaged on Priyanka’s 36th birthday on July 18 when the two were in London.

Jonas closed down a Tiffany store in New York City to buy an engagement ring, according to the insider.

“They are so happy,” the source told people.com.

A source close to Jonas said the singer is “very, very happy.”

“His friends and family have never seen him like this, and they’re all really excited for him. He’s definitely very serious about her,” the source added.

Priyanka and Jonas have been making several appearances together, often walking hand in hand.

Earlier this year, they walked on the Met Gala red carpet, making everyone wonder whether they are dating.

At the Met Gala, Priyanka had just laughed off a romance with Jonas, insisting they simply shared an agent and were friends. She had also said they went to the Met Gala together as they were both wearing ensembles by Ralph Lauren.

Later, they walked arm in arm at Jonas’ cousin’s wedding in New Jersey, apart from being seen roaming around on a boat with friends over America’s Memorial Day weekend in May. Priyanka was photographed cuddling up to him in a group photograph while they attended a Dodgers baseball game in New York together the same month.

Priyanka was also seen celebrating July 4 — the American Independence Day — with Nick’s family, and Nick visited India last month with the “Quantico” actress to meet her friends and family. The couple had also been sporting similar gold rings.