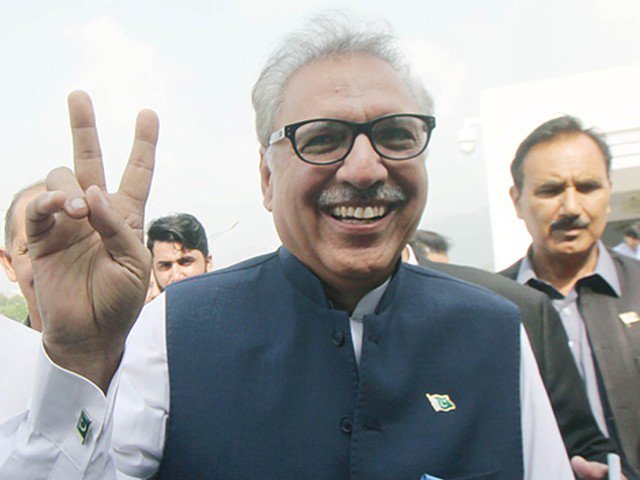 Islamabad: The ruling Pakistan Tehreek-i-Insaf’s (PTI) Arifur Rehman Alvi has been elected the 13th President of Pakistan, according to results provided by the Election Commission of Pakistan (ECP) on Tuesday.

The ECP said that a total of 1,110 voters participated in the presidential polls held simultaneously at the Parliament House and the four provincial assembles on Tuesday. Of the total votes cast, 27 votes were declared invalid.

The ECP has summoned the trio or their agents to the ECP Secretariat on Wednesday to witness the tabulation process, after which the official result will be announced and the winner notified.

Of the 61 Balochistan Assembly members, 60 cast their votes, with former Chief Minister Nawab Sanaullah Zehri the sole absentee. According to provisional results reported by DawnNewsTV, Alvi secured 45 votes, while 15 lawmakers voted for Rehman. Ahsan failed to receive any vote.

In the Sindh Assembly, Ahsan garnered 100 votes, Alvi bagged 56, whereas just a solitary vote was cast in favour of Rehman; one vote was wasted.

In the Khyber Pakhtunkhwa Assembly, Alvi received 78 of the total 109 votes, while Rehman and Ahsan had 26 and five votes respectively to their names.

In the Punjab Assembly, Alvi secured 186 votes, whereas Rehman and Ahsan received 141 and six votes respectively; 18 votes were rejected.

The unusually high number of rejected votes in the Punjab Assembly could be attributed to last week’s murmurs that a group within the PML-N was unhappy over the party’s decision to nominate Rehman, and even termed him a “bad choice”.

“I am grateful to God that the PTI-nominated candidate has been successful in the presidential race today,” Alvi said in his victory speech. “I am also thankful to Imran Khan for nominating me for such a big responsibility.”

In his impending five-year term, Alvi said he hopes that the “fortunes of the poor” take a turn for the better, and that they get “food, shelter and clothing”.

Alvi said that “from today I am not just a president that was nominated by the PTI but I am the president of the entire nation and all parties”.

“Each party has an equal right on me,” he added.

A joint sitting of the Senate and the newly-elected national and provincial assemblies — together known as the electoral college of Pakistan — was called to elect the country’s 13th president.

With an hour left in the 4 p.m. voting deadline, Prime Minister Imran Khan arrived at the Parliament House and cast his vote.

The newly-elected president will take oath of office on September 9 after the expiry of the five-year term of incumbent President Hussain.