Asian Journal
Home News Public school spending across Canada up 17.3% per student, on average, over... 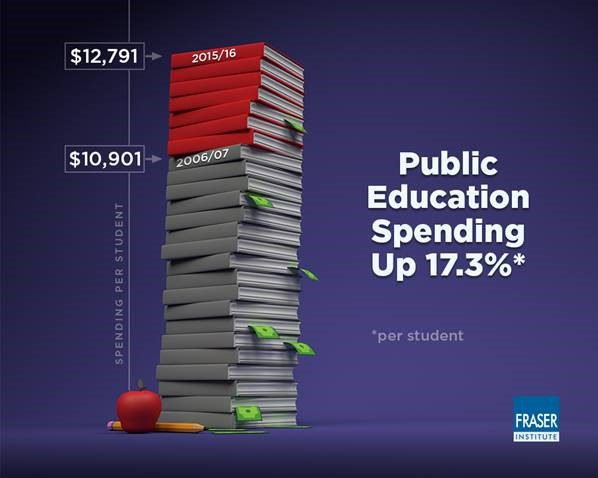 Vancouver: Spending on public schools across Canada increased in every province over the past decade by an average of 17.3 per cent, on a per-student basis, finds a new study by the Fraser Institute, an independent, non-partisan Canadian public policy think-tank.

“Contrary to what we often hear, spending is on the rise in public education systems across Canada,” said Angela MacLeod, a senior policy analyst with the Fraser Institute and co-author of Education Spending and Public School Enrolment in Canada, 2019.

The study finds per-student spending, after adjusting for inflation, increased from $10,901 to $12,791. Saskatchewan recorded the largest increase (36.4%) of any of the provinces. Manitoba along with the Atlantic provinces also experienced large increases in real-per student spending.

Nominal spending on public schools across Canada increased by 32.6 per cent, from about $49 billion in 2006/07 to nearly $65 billion in 2015/16, the most recent year of available Statistics Canada data.

Nationwide, teacher and staff compensation (salaries, pensions and benefits) accounted for 84 per cent of that increased spending, rising from $35 billion in 2006/07 to more than $48 billion in 2015/16.

During the same time period, there was a 1.8 per cent decrease in public school enrolment nationwide, which amounts to 95,000 fewer students. This is part of the reason why per student spending is increasing; even small nominal increases in spending get amplified when the number of students decline.

“In critical policy discussions, especially those that affect our children’s education, it’s important to understand exactly what’s happening with public education spending—how much money is being spent and where it’s going,” MacLeod said.

“Across Canada, the evidence is clear—public education spending has increased over the past 10 years in every single province.”