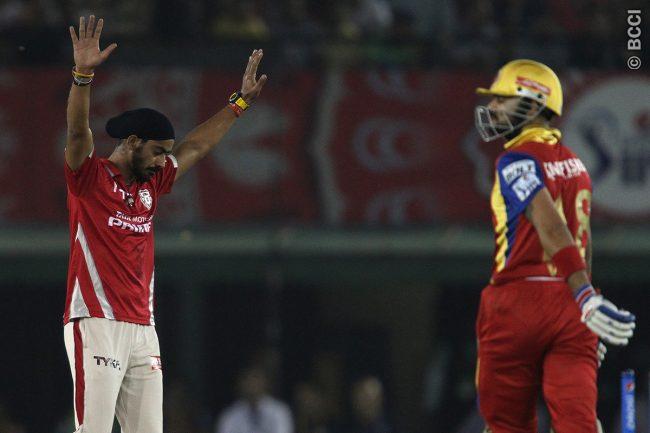 Punjab remained at the foot of the standings with six points from 13 matches despite the win. Bangalore stayed at the fifth spot with 13 points from 12 matches.

Chasing a target of 107 runs in 10 overs, RCB managed only 84 for six. They sent their two destructive batsmen West Indian Chris Gayle and Virat Kohli to open the innings.

They began briskly picking up boundaries at every possible opportunity. But Kohli (19) in the third over was dismissed in trying to force the pace.

Gayle (17) soon followed his skipper getting caught while trying a big shot to reduce RCB to 44 for two in 4.4 overs.

With two of their best ball-bashers gone, the onus was on another renowned power hitter South African AB de Villiers (10) to lead RCB’s cause. But he departed early too putting RCB in a spot of bother at 67 for three in 6.4 overs.

They never recovered from the blow lost wickets regularly to fall short of the target by 22 runs, managing only 84 for six.

Much before both the side’s skippers could get ready for the toss, rain halted their intentions. The toss was held at 10.30 pm, three hours later then the scheduled time. It reduced the Twenty-20 match to a 10-over per side contest.

RCB skipper Virat Kohli won the toss and elected to bowl, much to the relief of the fans at the stadium.

Wicketkeeper-batsman Wriddhiman Saha was promoted up the order and he opened the batting with Manan Vohra, who scored 11 in six balls.

Bengal’s right-handed batsman Saha made most of the opportunity of batting up the order, hitting 31 in just 12 balls. His knock included five fours and a six.