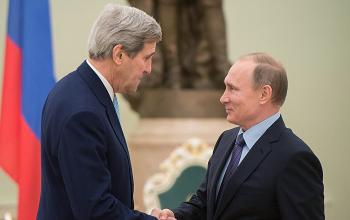 The cessation of hostilities and other positive outcomes on Syria issue became possible largely owing to the position of US leadership, in particular that of US President Barack Obama, Putin noted in his opening remarks at the meeting with Kerry.

“…We have managed to find some common ground and, leaning on this, move forward to address both bilateral and international issues,” Putin stressed, Xinhua reported.

Kerry expressed the hope that the talks could allow the two countries to find a way to “rebuild and strengthen the relationship between the US and Russia by proving that we can solve serious problems together.”

Kerry hailed the current truce between Syrian government and the opposition forces, which became reality thanks to US-Russia cooperation in both military and political ways.

He also said Russia’s withdrawing of the main part of its military forces deployed in Syria, which started on March 15, was “a very critical decision”.

“We obviously also have some ideas about how we can together, most effectively, make progress even deeper and then begin the very serious work regarding political transition process of Syria, ” Kerry said.

The top US diplomat added that issues on Ukraine crisis would also be discussed to push forward the peaceful settlement process.

The meeting between Putin and Kerry, with the participation of Russian Foreign Minister Sergei Lavrov, is still ongoing. A press conference given by Lavrov and Kerry is expected late Thursday night after the discussions with Putin.

Kerry’s visit to Moscow is the first time this year and the third in 12 months, while his talks with Lavrov on Thursday morning lasted nearly four hours and mainly focused on issues related to Syrian and Ukrainian crises.