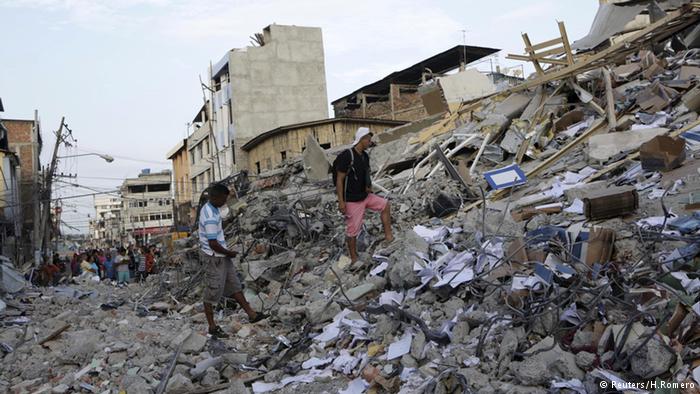 Manabi (Ecuador): The death toll from the earthquake that hit Ecuador’s Pacific coast over the weekend now stands at around 350, Security Minister Cesar Navas said on Monday.
“We’ve got close to 350 people killed. The number of injured has also risen,” Navas told Teleamazonas from Portoviejo, one of the worst-hit areas.
Officials said earlier in the day that 2,068 people were injured in the temblor, which toppled buildings and ripped up streets.
Search, rescue and evacuation operations continue, with teams from Colombia, Venezuela, Chile and Cuba, as well as firefighters from the Andean city of Cuenca, joining the effort in the past few hours, Navas said.
Aid distribution operations are also ongoing, with supplies being provided to the cities and districts most affected by the magnitude-7.8 earthquake, the minister said.
President Rafael Correa, meanwhile, visited the earthquake zone, getting a firsthand look at the damage.
Correa spoke with officials and listened to requests for aid and complaints from residents, who said water prices had surged in the aftermath of the natural disaster.
Quito Mayor Mauricio Rodas, for his part, said people injured in the earthquake were starting to arrive in the capital for treatment.
“The plane that carried humanitarian aid from Quito is returning with the injured so they can receive emergency treatment,” Rodas said in a Twitter post.
RTS television reported that other injured earthquake survivors had arrived in Quito on Sunday.
International aid is pouring into the South American country, with nearly 500 experts from nine countries, including Spain, Mexico, Chile and Switzerland, helping with search and rescue efforts, Foreign Minister Guillaume Long said in a Twitter post on Monday.
A total of 304 aftershocks have been registered since the powerful earthquake hit Ecuador’s northern tropical region on Saturday, Geophysics Institute director Mario Ruiz said on Monday.
The magnitude of the 40 aftershocks registered since Sunday night ranged from 3.5 to 5.6, the Geophysics Institute director said, adding that the figures did not include minor aftershocks.
The magnitude-7.8 earthquake “ripped up a fault that’s approximately 60 kms wide and 40 kms long, ending exactly in the area where the 1998 temblor occurred and it’s part of the fault that shifted in 1942,” Ruiz said.
“We’re talking about an area that has had seismic activity in the past, which had the earthquake of 1906, the 1942 earthquake and, a little more to the south, the 1998 one. It’s a wake-up call to us that we be more aware as a country that we live in a country that’s very exposed to earthquakes,” the Geophysics Institute director told Gama television.