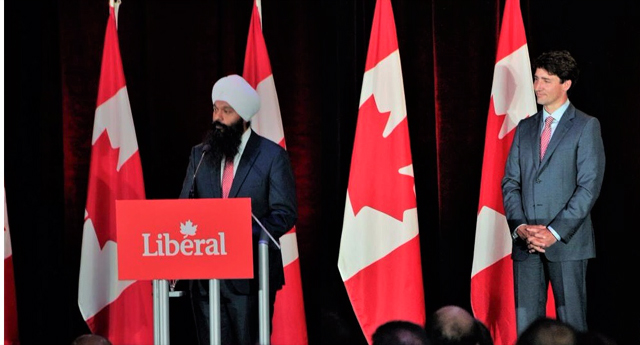 Surrey: Randeep Sarai, Member of Parliament for Surrey Centre, hosted a sold-out fundraiser dinner on Monday July 31st, for Prime Minister Justin Trudeau and the Liberal Party of Canada. Held at the Aria Banquet Hall and Convention Center, the evening was filled with several hundreds of guest’s eager to see the Prime Minister and show their support for the federal Liberals. The evening was emceed by AJ Cheema, with a formal introduction to the Prime Minister by Randeep Sarai, and closing remarks by Bilal Cheema.

Sarai began by thanking the Prime Minister for making time to visit Liberal supporters in Surrey. Sarai continued, “he is someone that has strong roots here in B.C. – he spent many years working and making the Lower Mainland his home. As Leader of our Party we are fortunate to have someone who knows the magnificence and beauty of our province, who knows our communities and is focused on addressing the challenges that we all face”.

Both Trudeau and Sarai commented on the unprecedented level of federal funding Surrey has received since the Liberals were elected in 2015. Actions taken include providing long overdue infrastructure funding to build Surrey’s LRT, investments in Surrey’s innovation center and clean technology, developing a national housing strategy to tackle affordability, working with the province to address the opioid crisis, renewing trade relationships with Asia Pacific countries to create well-paying jobs for British Columbians, and a $1.5 billion Oceans Protection Plan and crude oil tanker traffic moratorium to protect B.C.’s coastline.

Trudeau thanked the Surrey Center MP for his dedication to the riding and the province, “Thank you not just for that kind introduction but for the hard work you do every day on behalf of the people of Surrey, and communities across B.C. For those of you who don’t know, Randeep is also the chair of our Government’s Pacific Caucus. So, he’s not just looking out for the people here in Surrey, he’s also making sure that our entire Government is aware of, and responsive to the things that matter most to British Columbians. And he’s doing a great job, thank you Randeep”.

The Prime Minister attended the event following a visit with Premier John Horgan and members of his cabinet to affected areas in the interior of B.C., which have been struck by wildfires for the past month. Trudeau urged all attendees to donate to the Red Cross to support displaced families in the ongoing crisis.

“It’s great to see such a dedicated and strong team south of the Fraser, and at the same time it’s exciting to see new faces too, our new members. Since last summer you’ve helped to register more than 7500 new Liberals across the province, that’s more than 7500 British Columbians who like what they see from this new government. It doesn’t mean they agree with every decision we made, and that’s not a bad thing. We need to be challenged and hear from those that think our Government can and should do better. That’s how people continue to step up in shaping the future of our great country. It’s proof we are doing it the right way, we are connecting with Canadians, and strengthening the middle class. Just a few months ago I was in Surrey and I could see that the extra money families had in their pocket from the new Canada

Child Benefit was making a real difference. Families who needed the most help were receiving it” explained Trudeau.

The Prime Minister ended his remarks, “Canadians are strong, optimistic, value driven, hardworking and they have defined the success of this country. It won’t continue without effort. Generations of people came here to build a better life for themselves and their children. Yes, we look back to the challenges we’ve overcome, and successes we have seen, but mostly we look forward to our future full of promise. We can’t let anyone exploit our fears and anxieties, we need to recognize each and every one of us has the ability to positively impact our community, and that is what it means to be Canadian… 150 years since confederation we are committed to building this future by being members of the Liberal Party of Canada.”

Bilal Cheema closed stating “we look forward to supporting you for many years to come Prime Minister” and thanked Sarai for his efforts to host the successful event, and all the organizers and volunteers.

The event was held from 6:30 pm to 9:00pm and several hundred people were greeted by Sarai for the evening’s dinner, followed by opportunities to take photos with the Prime Minister. The event was attended by community and industry leaders, as well as long-time Liberal supporters.