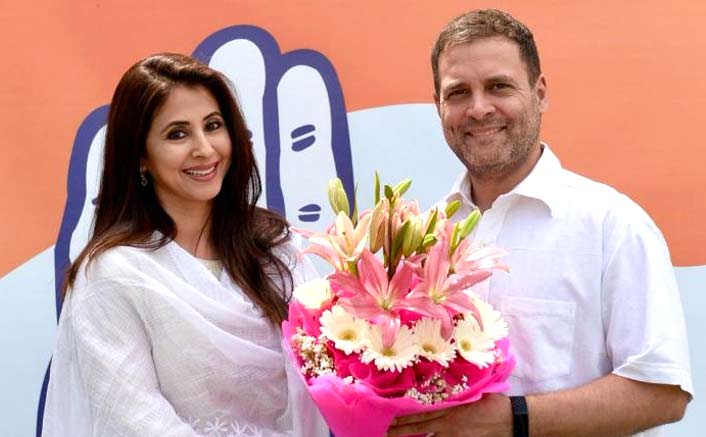 Matondkar, 45, who shot to fame as a child star in “Masoom” (1983), is likely to be named the Congress candidate for the Mumbai North Lok Sabha seat.

IANS had first reported on March 25 how her name was in “an advanced stage of consideration by the party high command” and the final decision would be announced shortly.

Welcomed into the party by top Congress leaders, including party President Rahul Gandhi, Matondkar dismissed all apprehensions, saying : “I am here to stay – even after the elections.”

Talking to media persons, she said there were questions pertaining to freedom of people under the Narendra Modi government. “I have entered politics to articulate those questions,” she said.

She also praised Rahul Gandhi saying a leader should judge people by their qualities and not their background.

If fielded in Mumbai North, Matondkar’s formidable rival would be Bharatiya Janata Party’s sitting MP Gopal Shetty in the constituency, which was once regarded a BJP bastion.

Incidentally, Mumbai North, after Mumbai North-West (now Mumbai North-Central) represented by actor-turned-politician Sunil Dutt five times since 1984, is the the second Lok Sabha constituency in the country’s commercial capital which has elected a well-known film personality.

Bollywood here Govinda (Ahuja) had earned the title of ‘giant-killer’ in 2004 when – in a major upset – he trounced former Union Petroleum Minister Ram Naik, who is now the Governor of Uttar Pradesh, in the seart

In 2009, Naik had faced his second consecutive defeat, this time at the hands of the Congress’s Sanjay Nirupam. But, in 2014, Nirupam was defeated by Shetty during the BJP-wave which catapulted Modi as the Prime Minister.

Mumbai’s six Lok Sabha constituencies are going to the polls on April 29, along with 17 others in the state’s fourth phase of elections.

The name of Matondkar, 45, married to a Kashmiri, M.A. Mir, has been doing the rounds since the past few days as the Congress grappled for an effective counter to the BJP.

Starting her film career as a seven-year old child star in a Marathi film, “Zaakol” (1980), she later got her first role in Bollywood in the Shashi Kapoor-Rekha starrer “Kalyug” (1981).

But, it was the highly-acclaimed Shekhar Kapur-directed film, “Masoom” (1983), that catapulted her to fame and significantly boosted her film career.

Besides, she has acted in Marathi and South Indian language films and several television serials.