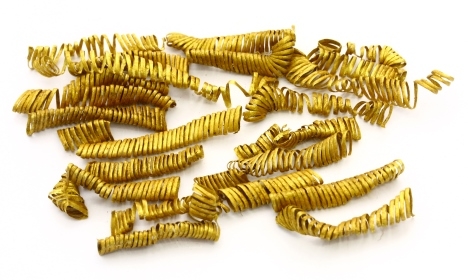 Copenhagen, July 15 (IANS) Nearly 2,000 small gold spirals that were recently unearthed in Denmark were put on display on Wednesday at a museum in Skaelskoer, 115 km southwest of here.
The gold spirals, measuring up to three cm in length, are made of thin, flattened gold wire, and archaeologists believe they date to the Bronze Age period from 900 to 700 B.C., reports Xinhua.
Archaeologists said they had never seen such things before in Denmark.
“Maybe the spirals were attached to cords which served as a small fringe on a hat or a parasol. Perhaps they were braided into the hair or embroidered on the suit,” said Flemming Kaul, curator at the National Museum of Denmark.
“The fact is that we do not know, but I tend to believe they were part of a priest king’s costume or headwear,” Kaul said.
The gold spirals were unearthed in the Boeslunde area to the north of Skaelskoer, where several Bronze Age gold artefacts had been found.
They were found in a field in an area of just a few square metres. In one area, they lay in rows or small bundles of three and four pieces together. In the other, the spirals were in a pile.
Together the rings weigh 3.5 kg and the bowls and beakers just over one kg, making them one of the largest gold finds from the Bronze Age in Northern Europe.