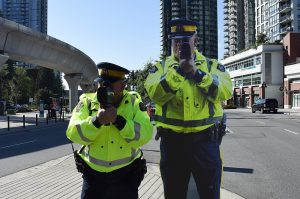 Coquitlam: The newest member of the Coquitlam RCNP traffic section is aiming to make a big impact on speeding drivers- even though he will never hand out a ticket or collect a paycheque.

‘Constable Scarecrow’ is a life-sized, metal poster-board that features a police officer with a laser speed-reader. For the next two months, Constable Scarecrow will be in service as a pilot project on the roads of Coquitlam and Port Coquitlam.

We’ve seen this sort of idea used before in the United Kingdom, but we haven’t seen it used here in combination with scientific monitoring, says Sergeant Quentin Frewing with Coquitlam RCMP Traffic Section. We think it could work, and it’s a low-cost, good-humoured way to improve our presence and perhaps make people think twice about speeding.

Mounties are not revealing the exact locations that Constable Scarecrow will be used, but problem speeding locations, such as those identified by other novel policing tools like the Coquitlam RCMP’s Black Cat speed-monitoring system, will be a priority.

Constable Scarecrow doesn’t write tickets of course, but drivers should be aware that real Mounties, and our Speed Watch volunteers, might be right around the corner waiting to help out, says Sergeant Frewing. The real goal here is to keep speeds down and keep our roads safe. That’s the sort of result that would make Constable Scarecrow sleep well at night- if he needed any sleep.