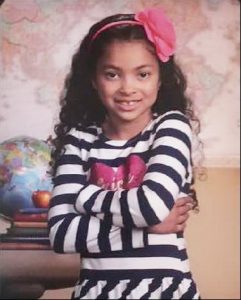 Langley: Police say a seven-year-old girl whose body was found at an apartment complex in Langley, is the victim of a homicide.

Police and emergency health services were called at about 9:30 p.m. on Sunday to the complex.

Cpl. Frank Jang of the Integrated Homicide Investigation Team says the girl has been identified as Aaliyah Rose and investigators want anyone who saw her on Sunday to come forward and speak to police.

He says a 36-year-old woman who is involved in the investigation is under medical care.

Jang wouldn’t release the relationship between the woman and the girl, saying only they were known to each other.

No charges have been laid in the case.

Jang says police want to speak to anyone who might have seen or interacted with Aaliyah on Sunday.

“Our investigators are interested in knowing her activities, who she was meeting up with. Perhaps she went to a park, community centre, a shopping mall … this past Sunday.”

Jang said Aaliyah lived in the complex where her body was found.

“Our investigations have a firm grasp, a firm understanding, of what happened, and we don’t believe the public is in any danger,” he said.

“We believe this was an isolated incident.”