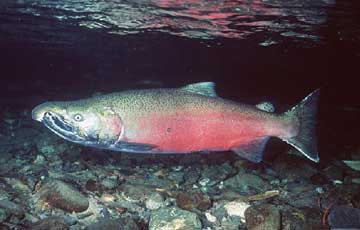 The Canadian Press
VANCOUVER: The Fisheries Department says record-breaking weather along the coast of British Columbia will affect Pacific salmon for years to come.
Ocean scientist Ian Perry says the warmest winter water temperatures since records were kept in 1948 have been observed in the eastern subarctic Pacific during the latter half of 2014 and 2015.
He says the conditions threaten the survival and growth of juvenile Pacific salmon that entered the ocean this spring and that fewer will return to B.C. to spawn in the next one to three years.
But he adds the heat won’t affect salmon that entered the sea before spring 2014 and scientists don’t expect any significant impact to the numbers of those returning fish.
Perry says the warmer temperatures have created a food web similar to the one that exists off California, with smaller, lower-fat animals for salmon to eat.
He says the higher temperatures have also caused a rise in predatory fish and forced salmon to change their migratory patterns.