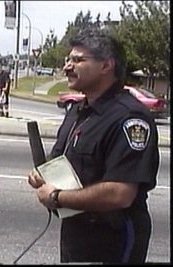 Nanaimo: The victim of a fatal head-on collision in Nanaimo on Saturday has been identified as a well-known retired police officer.

Abbotsford Police have confirmed that the victim was Sgt. Shinder Kirk, a long-time police fixture in the Lower Mainland gang war.

In one vehicle, Kirk was killed and two passengers were injured.

RCMP say no one in the second vehicle was taken to hospital.