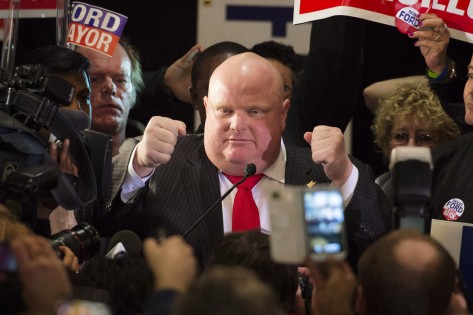 Toronto: The Rob Ford era is officially over in Toronto.

The term of the colourful and scandal-plagued mayor ended today as his successor, John Tory, took over leadership of Canada’s most populous city.

Premier Kathleen Wynne met with Tory _ a former Ontario PC leader _ at her office this morning at Queen’s Park.

Wynne and Tory say they agree it’s important to get all levels of government working together, with Wynne adding, “If the communication is better, there’s more potential that more can get done.”

Ford has been seldom seen since being diagnosed with a rare form of cancer, which led him to drop his bid for another term as mayor, although he did win a seat on council.

He issued a statement Sunday thanking the people of Toronto for their support while he was mayor and vowing to continue fighting against what he called “extravagance, wastefulness, and a general disrespect for both the taxpayers and their hard-earned dollars.”

Tory and his new council are to take the oath of office in front of the city clerk today, before being publicly sworn in on Tuesday at council’s first meeting of the new term.

Ford won the mayor’s office in 2010 and became an international celebrity after months of scandal that began last year, including admitting to using crack cocaine during a “drunken stupor,” and then completing a stint in rehab.

Tory says transportation will be at the top of his agenda, among other issues.

Wynne says she and Tory will be having regular meetings.

“We’re not going to necessarily agree on every policy or every file over the next four years, that’s not the point, but as elected leaders our responsibility is to work together,” said Wynne.