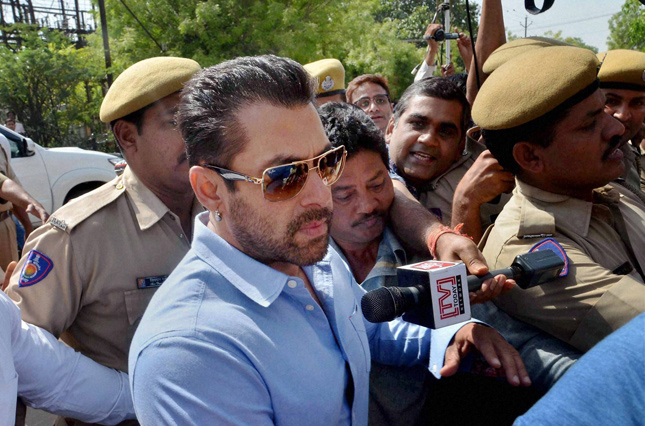 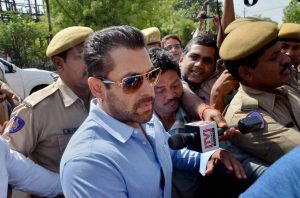 Mumbai, May 6 (IANS) Bollywood was in shock on Wednesday after superstar Salman Khan was sentenced to five years in jail for a 2002 hit-and-run that killed a man sleeping on a footpath and injured four others here. As the actor was to be taken to prison, the Bombay High Court gave him a two-day respite in the form of interim bail.

The 49-year-old Salman — heartthrob of millions — was in tears as Additional Sessions Judge D.W. Deshpande, who found him guilty on all the charges, pronounced the sentence in a packed courtroom, nearly 13 years after the tragic death in the suburb of Bandra.

Salman’s sisters, Alvira and Arpita, tried to console him although they themselves were crying.

One of the highest paid actors in Bollywood, Salman was sentenced for culpable homicide not amounting to murder and driving without licence. He was also held guilty of rash and negligent driving – for ramming his Land Cruiser into the American Express Bakery after running over the victim, Nurullah Mahboob Sharif, in September 2002.

The others injured in the accident were Munna Malai Khan, Kalim M. Pathan, Abdullah Rauf Sheikh and Muslim Shaikh.

“All the charges have been proved against you… What do you have to say?” Judge Deshpande asked Salman who was in the dock.

“I hold that you were driving the vehicle. You were intoxicated. I also do not agree with your plea that the person who had died had received fatal injuries after a crane dropped the car on the persons underneath while removing it,” the judge added.

He rejected defence lawyer Shrikant Shivade’s contentions that the actor’s driver Ashok Singh was at the wheel when the accident took place, and owned up responsibility belatedly.

Salman, attired in a white shirt and light blue denim jeans, however, insisted that he was not driving the car. “But I respect your decision and accept it. My lawyer will speak on my behalf.”

In the high court, senior Supreme Court counsel Harish Salve cited medical reasons for seeking bail and also argued that no one can be arrested on the basis of a summarised court order. The hearing on the bail application will be taken up on Friday.

Friday will be the final working day of the Bombay High Court before it goes on annual summer vacation. It will reopen on June 7.

Although his lawyers spoke about his poor health, Salman was shooting in Kashmir for “Bajrangi Bhaijaan”, one of the much-anticipated films this year. The other is “Prem Ratan Dhan Payo”. The total cost of the two films would be around Rs.200 crore.

Known for giving blockbusters like “Kick”, “Wanted” and “Ek Tha Tiger”, Salman has acted in about 100 movies since he made his debut in 1988 with “Biwi Ho Toh Aisi” as a supporting actor.

The film that brought him glory was the 1989 hit “Maine Pyar Kiya”.

In no time after Salman was sentenced, Bollywood plunged into gloom. “We all know that Salman is excellent as human who can’t fight with destiny,” said producer and director Subhash Ghai.

Actor-producer Riteish Deshmukh called Salman one of the “finest people I have met in this industry”. Actress Bipasha Basu added: “Salman is the nicest human being in this business… Deeply saddened.”

But activist lawyer Abha Singh said justice has finally been done. “I am very happy,” she told the media. “Justice has been done. The law has been upheld.”

She said the long delay in the case had given the impression that the rich could get away with murder in India, and that the moneyed were above the law.

This is the third case of a high-profile Bollywood actor going to jail in Mumbai.

In May 2013, actor Sanjay Dutt was convicted for his role in the 1993 Mumbai serial bombings and sentenced to five years in jail. He is lodged in Pune’s Yerwada Central Jail.