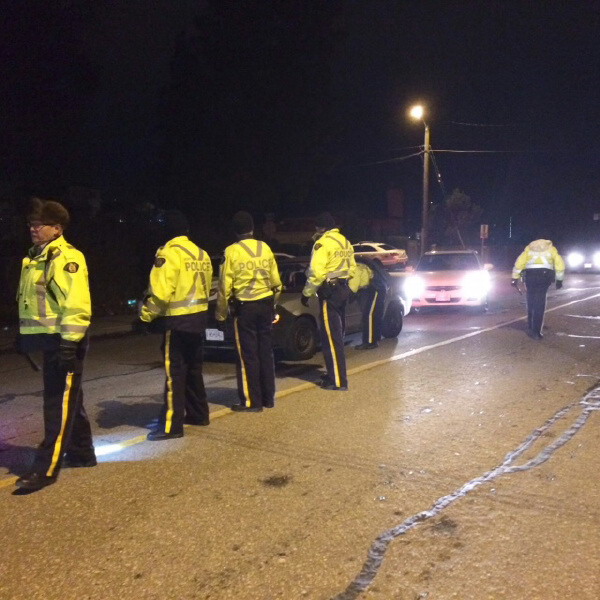 Season’s Warnings from Police after 24,000 Vehicles were Checked on Friday Night

There were 157 places where drivers were stopped across BC during a Counterattack blitz on Friday night, Dec. 4. The RCMP’s collective efforts, with ICBC and Operation Red Nose, resulted in over 24,000 vehicles being checked and 116 impaired drivers were removed from our roads.

“I have no doubt that coordinated police efforts such as this save lives and reduce crime and needless tragedy,” says Cpl. Ronda McEwen, spokesperson for BC RCMP Traffic Services.

The Dec. 4 blitz was highlighted throughout the night, as tweets told stories and showed images of vehicles being towed from police checks, across the province.

Not only was alcohol impairment a significant concern but drug impaired drivers were also removed from the road. “These stats are a tragic reminder that some drivers are willing to put themselves and others at great risk; regardless of the consequences,” says Cpl. McEwen.

“BC has some of the toughest impaired driving laws in Canada and police are dedicated to enforcing these laws; not only during December, but all year long and we need our communities to support our efforts. When you plan your festivities, plan your safe ride home too. Friends, colleagues and loved ones need to hold each other accountable and we encourage road users to call 911 when they suspect an impaired driver. Collectively, we can save lives this holiday season and make BC roads the safest in Canada,” reminds Superintendent Derek Cooke, Officer in Charge of BC RCMP Traffic Services.

“We would like to acknowledge police officers across BC for their hard work this holiday season, as they are missing out on time with their own families, in order to keep everyone else’s families safe. While the majority of BC residents realize driving is a privilege that is earned, everyone has the right to get home safe.  Thank you for respecting that privilege by making the right choice to not drink and drive this holiday season. For the minority who make the poor decision to mix their holiday drinking with driving, police officers across BC will ensure that privilege is taken away,” says Staff Sergeant Dale Somerville, BC RCMP Traffic Services.

We also remind motorists to keep all emergency and support crews safe by slowing down and moving over when they see flashing red, blue or yellow lights. For more traffic tips follow @BCRCMP Traffic. For a free and safe ride home in many communities, check out operationrednose.com or call 1-877-604-NOSE (6673)