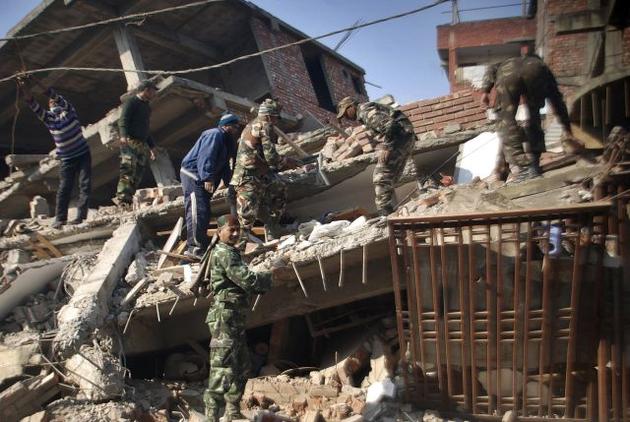 Imphal/Shillong, Jan 4 (IANS) At least seven people were killed and over 100 injured when an earthquake measuring 6.7 on the Richter scale rocked Manipur and other northeastern states before dawn on Monday. West Bengal too was hit, as was neighbouring Bangladesh where five deaths took place.

The toll in Manipur could rise even as rescue operations were on, officials said. The quake snapped power supply across the state, felled multi-storeyed buildings in state capital Imphal and damaged many vehicles.

“The toll has risen to seven and 69 people have been injured,” principal secretary in-charge of home Suresh Babu told IANS in Imphal.

“There has been a lot of damage in Imphal. It is difficult for us to assess the total damage at the moment but the district administrations are on the job,” he said.

The quake, with epicentre in Manipur’s Tamenglong district, took place at 4.35 a.m. It was also felt in Assam, Arunachal Pradesh, Meghalaya, Nagaland, Mizoram and Tripura besides Myanmar and Bhutan.

In Tamenglong, Babu said four people were seriously injured at Noney village. Officials said there were 14 aftershocks on Monday morning.

The Indian Air Force flew a National Disaster Response Force (NDRF) team from Guwahati to Imphal, and to Silchar in Barak Valley of Assam with 3.5 tonnes of rescue equipment.

“We have stationed an NDRF team at Imphal and Tamenglong to deal with the rescue and search operation,” an official said.

Manipur Chief Minister Okram Ibobi Singh, who chaired an emergency cabinet meet, said the government has taken all steps to deal with the disaster.

The government would pay an ex-gratia of Rs.5 lakh each to the families of those killed and pay for the medical treatment of the injured, Education Minister M. Okendro said.

All schools will be closed for seven days to assess damage to the buildings in order to ensure safety of the student community.

The Ima Keithel — the day market for mothers in Manipur — would be renovated as it was badly damaged, the minister said.

Telecommunication and electricity services were badly disrupted in the affected areas.

Prime Minister Narendra Modi spoke to Ibobi Singh, and urged Home Minister Rajnath Singh, who is in Assam and who personally felt the quake, to oversee the situation.

“Once a report is received, the central government will come out with assistance. There may be more casualties in the interior areas,” he said.

People who fled their homes in panic remained on the streets, fearing aftershocks. Many recited verses from the Quran.

In Guwahati, Rajnath Singh said all central assistance would be extended to the northeastern states.

“Manipur’s chief secretary told me the damage is more in the state. The Centre will extend all required assistance to the northeastern states to deal with the crisis.”

In New Delhi, the National Disaster Management Authority (NDMA) coordinated with northeastern states and the ministries of home affairs and defence and other agencies, a home ministry statement said.

At least 12 people were injured in northern West Bengal’s Jalpaiguri and Darjeeling districts.

India’s northeast is considered the sixth major earthquake-prone belt in the world. In September 2011, Sikkim suffered heavy damage as a quake hit the state.

Monday’s temblor occurred as a result of a strike-slip faulting (vertical or nearly vertical fractures where the blocks have mostly moved horizontally) in the boundary region between India and the Eurasian plate in southeast Asia, according to the USGS.