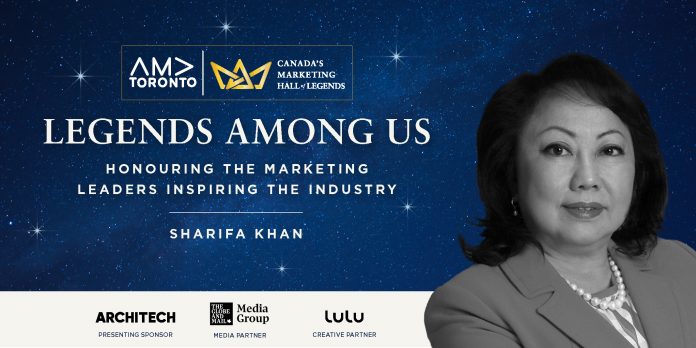 Toronto, ON – Visionary marketer, Sharifa Khan, founder and CEO of Canada’s largest, longest-running multicultural marketing agency, has broken many glass ceilings throughout her career, but this one, making history today represents the highest industry honour that our country offers.

At a virtual gala on April 22, Khan will become the first multicultural marketer to be inducted into Canada’s Marketing Hall of Legends (CMHOL), as appointed by a jury of her industry peers.

“To every person out there who is quietly holding onto big aspirations, who is seeing an untapped opportunity, and who is following an as yet uncharted path: I hope this induction re-enforces you and  your dreams, that they are worth pursuing, even if they haven’t been fully articulated yet,” said Khan.

“When I first opened up our multicultural marketing agency 30 years ago, there was no such marketing discipline at the time; to see it now breaking through to be honoured at the highest levels, moves me deeply.”

This year, Sahar Saidi, founder and CEO, LUS Brands is also being named as the 2021 Marketer on the Rise for her exceptional work in her direct-to-consumer commerce brand based in Toronto.

One common thread among all of this year’s inductees is their deeply held conviction for following their passions and making a difference. For Khan, deepening the value of multicultural communities in Canada, and meaningfully connecting them to mainstream brands, businesses and governments has been a lifelong, personal mission.

In making their selections, CMHOL looks for the industry’s “most inspiration visionaries, enablers, builders and mentors,” who have positively influenced the Canadian and global marketplace through branding, marketing and giving back to community.

To this end, Khan is not only credited for envisioning and establishing the industry known as multicultural marketing today, she is also lauded for giving countless newcomers over the past three decades their first big job breaks in Canada. In fact, Khan is recognized for launching the decorated careers of many talented marketers, and mentoring them over the years as they pursued their own passions in this field.

Today, with Khan at the helm, Balmoral continues to be a trailblazer in the industry. It is the first multicultural marketing agency to operate offices in Canada, China and India – marketing to would-be newcomers, and building loyalty before they arrive to Canada. The agency has won many industry accolades, from such prestigious award shows as: the CASSIES, Marketing, and Summit.

Under Khan’s leadership, her 40+ team members are guided by the principle that cultural relevance is the most powerful connector and the agency serves such clients as: the Government of Ontario, City of Toronto, OLG, Metrolinx, BMW, Sobeys, Canada Life, Samsung, Ottawa Tourism, Clorox, Brita, Burt’s Bees, Oxford Properties among others.

Throughout her 40-year career, Khan has personally broken boundary after boundary, all as a result of serving her calling. She has been honoured by former Canadian Prime Minister Jean Chretien for her entrepreneurial success.  In 2002, she was the recipient of Queen Elizabeth II’s Golden Jubilee Award and then in 2012, she received the Diamond Jubilee Award. In 2013, she was selected one of Canada’s top 25 immigrants. And in 2018, Khan was named as one of Canada’s top 18 Women of Influence.

Khan has also served many boards and charities over the years to promote goodwill – always making valuable connections for Canada’s multicultural communities. For example, Khan was the first minority group female vice president of the Canadian Club. She has served on the boards of the United Way of Greater Toronto, and the Toronto Board of Trade. Khan was vice-chair of OCAD University and a director of Ontario Creates. Today, she is Honorary Advisor to Chinese Cultural Centre of Great Toronto and the Canadian Ethnic Media Association and on the board of governors of two Toronto hospitals.

“I’d like to thank the Toronto Chapter of the American Marketing Association and all of the contributors to Canada’s Marketing Hall of Legends, including its sponsor, Architech, and partners, the Globe and Mail and Lulu Marketing for such an exemplary collective effort to advance our industry,” said Khan.

“I would also like to offer my heartiest congratulations to my fellow inductees for their extraordinary accomplishments, it is a great honour to be in your company.”