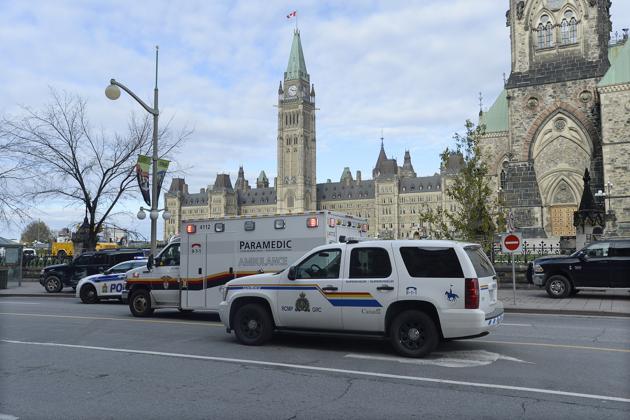 The Hill remains under lockdown amid reports there may be two to three shooters, according to a senior official locked in the Official Opposition Leaders’ office.

The Langevin Block, home of the Prime Minister’s Office across the street from Parliament Hill, has now been evacuated and citizens are being moved back more than two blocks from the Parliamentary precinct.

Police herded bystanders off the street into a major office building and warned people to stay away from the windows.

Conservative MP Bob Zimmer has tweeted that a gunman was shot and killed, but that report was not immediately verified by police.

Two sources told The Canadian Press that Kevin Vickers, the sergeant-at-arms for the House of Commons, shot an assailant.

Prime Minister Stephen Harper was rushed away from the building to an undisclosed location, officials in his office said.

Ottawa police confirmed they had a call at 9:52 a.m. with a report of shots fired.

At least one gunman reportedly ran towards Parliament Hill, which is currently under lockdown and surrounded by security.

Cabinet minister Tony Clement tweeted that at least 30 shots were heard inside the building, where Conservative and Liberal MPs were holding their weekly caucus meetings.

Most of those MPs remain locked down in their caucus rooms.

The NDP caucus was evacuated along with the Liberal Senate caucus.

Karl Belanger, a senior aide to NDP Leader Tom Mulcair, says security told them to remain locked in the Opposition leader’s office as there may be two or three gunmen.

A witness reported that a man drove up in a black vehicle, got out carrying a rifle and ran into the Centre Block   the seat of the House of Commons under the Peace Tower.

The vehicle, with no rear licence plate, parked directly in front of the Langevin Block.

Witnesses report seeing a man dressed in black with a scarf wrapped around his face, carrying a double-barreled shotgun

Shots were fired in several different corridors inside the Centre Block, according to witnesses. Some people fled the building by scrambling down scaffolding erected for renovations.

Chuck Bronley of Ottawa said he was near the memorial when he heard four shots and saw a man running away carrying what he said was a rifle.

A tourist from the Netherlands was also nearby when he heard four shots, and saw an armed man with long, dark hair fleeing.

Police were yelling at bystanders, shouting that there was still a shooter on the loose.

“DND member is down,” one officer was overheard saying.

Bronley was fairly certain the victim was one of the ceremonial guards at the War Memorial.

Two people vigorously pumped the victim’s chest on the stairs of the War Memorial, until the victim was finally placed on a stretcher and ushered into an ambulance shortly after 10 a.m.

The incident comes just two days after two Canadian soldiers were run over   and one of them killed   in Quebec by a man with jihadist sympathies.