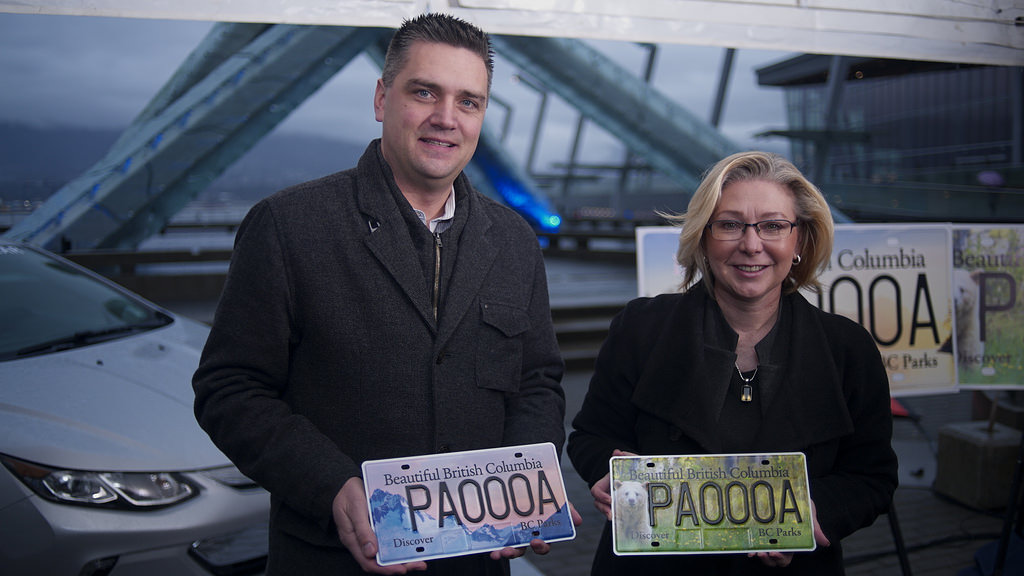 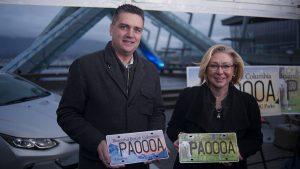 Vancouver: The legendary Kermode bear found only in British Columbia, the snow-capped Purcell Mountains and a stunning view from Porteau Cove overlooking Howe Sound – these are the iconic images emblazoned on the new BC Parks commemorative licence plates.

The Province introduced this series of specialty licence plates, all depicting scenes from B.C.’s parks and recreation areas, in partnership with the Insurance Corporation of British Columbia (ICBC). The public can show their passion and pride for British Columbia by sharing the natural beauty of BC Parks on their licence plates, available for purchase at Autoplan broker offices as of Jan. 29, 2017.

The Kermode bear is a rare subspecies of black bear, found only in British Columbia and can be found between the Burke Channel in the south and roughly up to the Nass River in the north. The Purcell Mountains make up the natural backdrop of the Purcell Wilderness Conservancy Provincial Park and Protected Area in southeastern British Columbia. Porteau Cove Provincial Park is a park open year round and features waterfront campsites overlooking Howe Sound to the mountains beyond. To view the three licence plate designs, please visit: http://www.icbc.com/vehicle-registration/licence-plates/Pages/bc-parks-plates.aspx

The new speciality plates are part of the BC Parks Future Strategy, announced by Premier Christy Clark on Nov. 28, 2016. Within the strategy the Province is investing $22.9 million to build 1,900 new campsites, is seeding a new BC Parks Foundation with a $5-million endowment, and will be allocating funding in 2017 for other recreation and conservation initiatives, including hiring more park rangers.

The licence plates allow motorists to show their support, while ensuring BC Parks has additional funds to invest in new programs and improvements. The BC Parks specialty plates will cost $50.00 for the initial purchase, and $40.00 for each annual renewal. All net proceeds from the sale and ongoing renewals of BC Parks licence plates will be re-invested back into provincial parks through the Park Enhancement Fund, a transparent account where revenues enhance programs or services in provincial parks beyond the core services provided by government.

Other programs are also being established within the strategy to give individuals the opportunity to preserve and protect British Columbia’s world-renowned provincial parks system. For example, a new online donation portal now allows individuals or businesses to donate to their favourite park, enhancement project or BC Parks’ partner via credit card, and immediately receive an official tax receipt for contributions of $25.00 or more. To make a donation, please visit: www.env.gov.bc.ca/bcparks/donate/

Mary Polak, Minister of Environment said: “I encourage everyone to show their British Columbia pride and purchase a BC Parks licence plate to do their part to help protect these spectacular natural spaces for future generations. All net proceeds go toward preserving and protected our world-renowned parks system.”

Todd Stone, Minister of Transportation and Infrastructure said: “Motorists can choose the design that best reflects their passion and pride for British Columbia, and do their part to help protect these unique natural spaces. Thanks to ICBC for all of their hard work to help the public acquire their very own specialty BC Parks licence plate.”

Ric Careless, chair, Campaign for BC Parks said: “With these new licence plates, British Columbians can show just how much we love our world-class parks. The sales of the plates will add extra dedicated money to the enhanced funding government is investing in our parks. So now, even when stuck in traffic, looking at the parks licence plate on the car ahead, you will be reminded of the beautiful natural protected places across B.C. that you can visit and escape to.”

Mark Blucher, president and CEO, Insurance Corporation of BC said: “Earlier this year we completed our corporate transformation program, including a new insurance sales system which made it possible for us to introduce the BC Parks licence plates. These BC Parks plates represent the first new specialty plates available for the general public since the popular Vancouver 2010 Olympic Winter Games plates.”