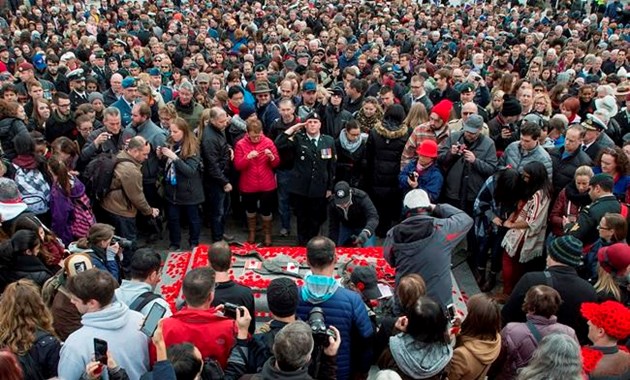 OTTAWA: As the great bell in the nearby Peace Tower tolled 11, a solemn, two-minute silence fell over a crowd of thousands surrounding the National War Memorial for the annual Remembrance Day ceremony.

Stooped veterans, some wrapped in blankets against the November chill, joined serving members of the Forces and hundreds of ordinary Canadians who lined the sidewalks around the towering granite and bronze memorial under overcast skies.

The silence was broken by the skirl of a piper.

The traditional ritual opened with a bugler sounding the sad notes of the Last Post.

An artillery battery by the East Block of the Parliament Buildings boomed out a 21-gun salute.

The first crash of the guns startled a toddler in the crowd to tears, but the thundering noise stopped moments later and she stared, wide-eyed as a pair of CF-18 jets snarled overhead in a flypast.

A chaplain recited a long list of battles, from Vimy Ridge to Afghanistan, saying the names of the dead must never be forgotten.

Johnston said he is deeply grateful for the sacrifices made by veterans.

“Serving others is never easy, particularly for those who serve in uniform,” he said in a statement.

“These women and men risk their lives every day for ideals that we sometimes take for granted. But some things are worth the risk.

“Our freedoms are worth struggling for. Peace is worth striving for. Family and community are worth sacrificing for.”

In a statement, Trudeau paid tribute to generations of sacrifice.

“Members of our Armed Forces _ past and present _ routinely put their lives on the line for our country,” he said. “They represent the very best of what it means to be Canadian.”

The ceremony included Sheila Anderson of Yellowknife, the Silver Cross mother representing all mothers who have lost children in military service.

She leaned on a cane as she placed her wreath.

Her son, Cpl. Jordan Anderson, was killed by a roadside bomb in Afghanistan in July 2007.

A children’s choir sang In Flanders Fields as dignitaries filed up to place wreaths against the memorial.