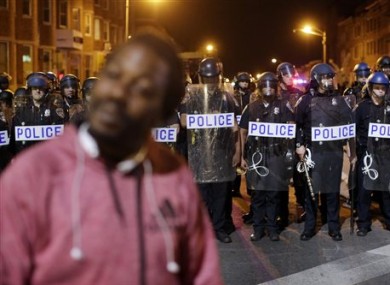 Washington, May 1 (IANS) Six members of the Baltimore City Police Department will face charges for the death in custody of black man Freddie Gray, the prosecutor handling the case said on Friday.

The state’s attorney for Baltimore City Marilyn Mosby said that the arrest of Gray, who died on April 19 of a deadly spinal cord injury, was “illegally” and that the state medical examiner ruled Gray’s death a homicide.

The spinal injury that led to his death was caused while he was riding in a police van, during which he was not buckled, Mosby said in a press conference.

Police officers also had no probable reason for Gray’s arrest at the first place, said Mosby, adding that a knife found in Gray’ s pocket was not an illegal switchblade.

“Gray suffered a severe and critical neck injury as a result of being handcuffed, shackled by his feet and unrestrained inside of the BPD (Baltimore Police Department) wagon,” she said. “We have probable cause to file criminal charges.”

The driver of the police van was charged with second-degree murder while the other five officers were charged with crimes including assault, manslaughter and false imprisonment, the prosecutor said.

The announcement from the state prosecutor came unexpected as Baltimore officials, including both Baltimore mayor Stephanie Rawlings-Blake and Police Commissioner Anthony Batts, tried to play down public expectation that any charges against the six police officers would be presented Friday.

The city of Baltimore has witnessed a widespread of protests, sometimes-uncontrolled ones, in the past 10 days due to the death of Gray.

Meanwhile, Mosby called on the public to remain calm, as the city was still healing from Monday’s widespread unrest hours after Gray’s funeral. According to Baltimore police department, 144 cars were set ablaze, 15 structures on fire and 200 rioters were arrested in Monday’s riot.

“I heard your call for ‘no justice, no peace,'” Mosby said. ” Your peace is sincerely needed as I work to deliver justice on behalf of this young man.”