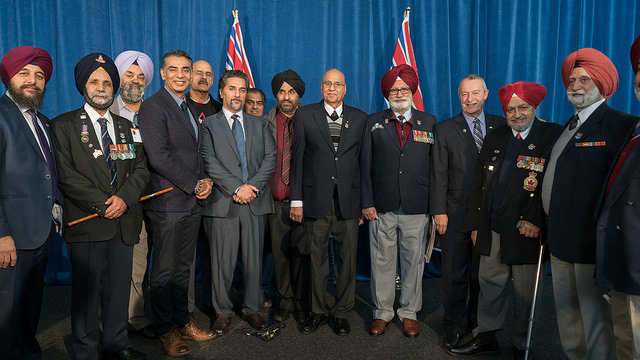 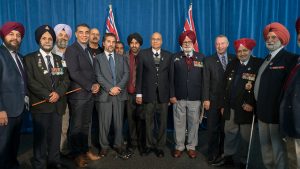 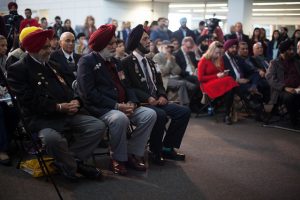 Directly before the announcement, the students participated in an interactive guided tour of the Indus Media Foundation’s heritage display, ‘Duty, Honour & Izzat – The Call to Flanders Fields,’ which commemorates the contribution of the Indian army to the First World War. During the war, Punjabi soldiers were fighting shoulder-to-shoulder with Canadians and suffered enormous losses. In death, they lie or are commemorated beside their Canadian brothers-in-arms in hundreds of cemeteries around the world.

The new funding will help the Indus Media Foundation expand its existing display exhibit and create learning tools and teacher resources that can be shared in classrooms throughout the province. This will provide additional opportunities for British Columbians to honour those who lost their lives, as well as engage youth of all cultures in our shared history.

The contributions of the South Asian communities to B.C. are part of British Columbia’s new K-12 curriculum, which will be fully implemented by the 2018-19 school year.

Peter Fassbender, Minister of Community, Sport and Cultural Development said: “World War One’s legacy will forever be remembered by British Columbians of all backgrounds. The Government is proud to support the Indus Media Foundation’s efforts to enrich our cultural and historical narrative by raising awareness of the sacrifices made by the Punjabi community.”

Amrik Virk, MLA for Surrey-Tynehead said: “The heritage exhibit on display here today demonstrates how people from diverse cultures and societies shared a common experience and fought together for the freedoms we enjoy today. The Province is committed to recognizing the contributions that have been made by diverse communities that make up our province and our country.”

Steven Purewal, managing director and curator, Indus Media Foundation said: “Within a common heritage under the Crown, there are many inspirational stories of diverse peoples coming together in solidarity. Within the frame of the First World War, the protagonists were often Punjabis; 500,000 fought, over 9,000 gallantry awards were won. These lost tales underscore the ties that bind – they can also inform a shared future.”

* B.C. is the most ethnically diverse province in Canada and welcomes nearly 40,000 new immigrants every year.

* Punjabis are the largest South Asian ethnic group in Canada.

* For over a century Sikhs have called British Columbia their home.

* Almost 30% of the people in B.C. are self-identified visible minorities.