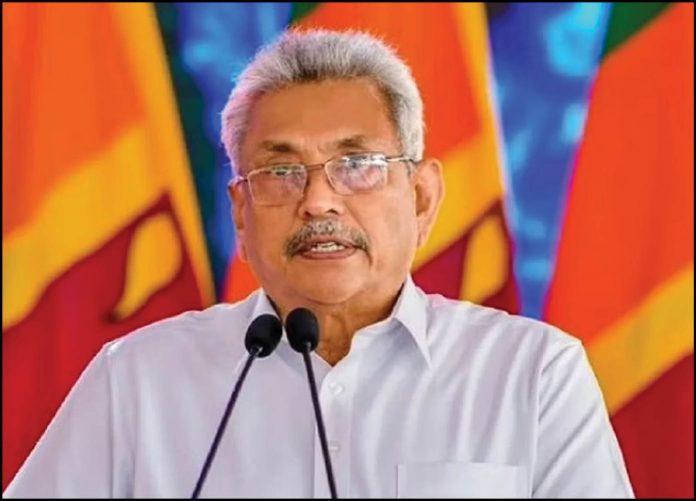 Colombo, Sri Lanka (AP): The president of Sri Lanka fled the country early Wednesday, slipping away in the middle of the night only hours before he was to step down amid a devastating economic crisis that has triggered severe shortages of food and fuel.
President Gotabaya Rajapaksa, his wife and two bodyguards left aboard a Sri Lankan Air Force plane bound for the city of Male, the capital of the Maldives, according to an immigration official who spoke on the condition of anonymity because of the sensitivity of the situation.
Rajapaksa had agreed to resign under pressure. Prime Minister Ranil Wickremesinghe said he would leave once a new government was in place.
The president’s departure followed months of demonstrations that culminated Saturday in protesters storming his home and office and the official residence of his prime minister. The protests have all but dismantled his family’s political dynasty, which ruled Sri Lanka for most of the past two decades.
On Wednesday morning, Sri Lankans continued to stream into the presidential palace. A growing line of people waited to enter the residence, many of whom had traveled from outside Colombo on public transport.
“What Rajapaksa did flee the country is a timid act,’’ said Bhasura Wickremesinghe, a 24-year-old student of maritime electrical engineering, who came with friends. “I’m not celebrating. There’s no point celebrating. We have nothing in this country at the moment.’’
He complained that Sri Lankan politics have been dominated for years by “old politicians’’ who all need to go. “Politics needs to be treated like a job you need to have qualifications that get you hired, not because of what your last name is,’’ he said, referring to the Rajapaksa family.
There was no end to the crisis in sight, and protesters vowed to occupy the official buildings until the top leaders are gone. For days, people have flocked to the presidential palace almost as if it were a tourist attraction swimming in the pool, marveling at the paintings and lounging on the beds piled high with pillows. At one point, they also burned the prime minister’s private home.
At dawn, the protesters took a break from chanting as the Sri Lankan national anthem blared from speakers. A few waved the flag.
Malik D’ Silva, a 25-year-old demonstrator occupying the president’s office, said Rajapaksa “ruined this country and stole our money. He said he voted for Rajapaksa in 2019 believing his military background would keep the country safe after Islamic State-inspired bomb attacks earlier that year killed more than 260 people.
Nearby, 28-year-old Sithara Sedaraliyanage and her 49-year-old mother wore black banners around their foreheads that read “Gota Go Home,’’ the rallying cry of the demonstrations.
“We expected him to be behind bars _ not escape to a tropical island! What kind of justice is that?’’ Sithara said. “This is the first time people in Sri Lanka have risen like this against a president. We want some accountability.’’
The air force said in a statement that it provided an aircraft for the president and his wife to travel to the Maldives with the defense ministry’s approval. It said all immigration and customs laws were followed.
“This shows what befalls a leader who uses his power to the extreme,’’ said lawmaker Ranjith Madduma Bandara, a senior official of the main opposition party in Parliament, United People’s Force.
Sri Lankan lawmakers agreed to elect a new president next week but have struggled to decide on the makeup of a new government to lift the bankrupt country out of economic and political collapse.

By Krishan Francis
and Krutika Pathi

PM Narendra Modi to attend I2U2 virtual summit with leaders of US, Israel, UAE on...