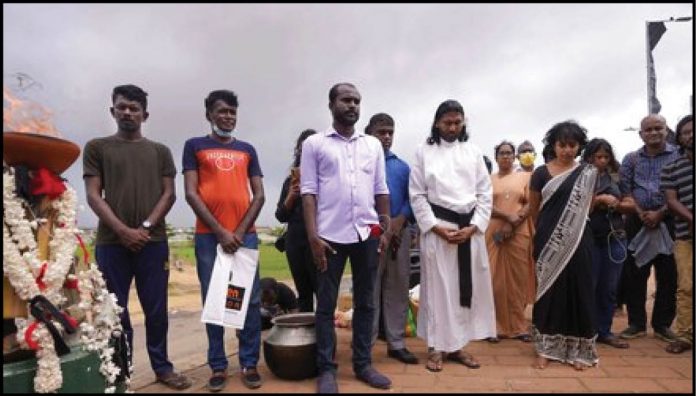 Colombo, (AP): Sri Lankan protesters lit flames and offered prayers Wednesday remembering thousands including ethnic Tamil civilians killed in the final stages of the country’s decadeslong civil war, in the first-ever event where mostly majority ethnic Sinhalese openly memorialized the minority group.
Protesters gathered outside the president’s office floated flowers in the nearby sea and prayed for all those who died in the 26-year civil war, including Tamil civilians, Tamil rebels and government soldiers.
While grand state events have been held almost every year since the war ended in 2009 to remember and celebrate the soldiers, this is the first time an event that also remembers Tamils is being held by mostly Sinhalese in the country’s capital, Colombo.
“I am a Sinhalese by birth. Today we held a memorial for all those who were killed 13 years ago, Sinhala, Muslim, Hindu and everybody as a result of state terrorism and terrorism by non-state groups,’’ said Sumeera Gunasekara, a social media activist who participated in the event.
“There are still those who are grieving because of these events and as a Sinhalese I have a right to share in their grief, because I believe in the religion of humanity more than any other.’’