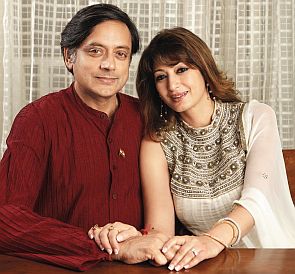 Delhi Police Commissioner B.S. Bassi said a murder case had now been registered against “unknown persons” and that the final medical report was clear that Pushkar, 52, died an unnatural death.

“She died due to poisoning. Whether the poison was given orally or injected into her body is being probed,” he said, adding her viscera would be sent abroad.

Ruling out suicide, Special Commissioner of Police Deepak Mishra said it was a case of “homicidal poisoning”.

Tharoor, a former central minister who is the Lok Sabha member from Thiruvananthapuram, said he was stunned by the developments and assured full cooperation with police.

Pushkar was found dead in a luxury hotel Jan 17, 2014, a day after she and Tharoor checked in because their house was allegedly getting painted. Both had been married twice earlier.

Tharoor was then the minister of state for human resource development in the Manmohan Singh government.

A day earlier, Tharoor and Pushkar had issued a joint statement saying they were “happily married and intend to remain that way” following media reports that Tharoor allegedly had an affair with a Pakistani journalist.

The Congress said it was not clear from Bassi’s comments if Pushkar killer herself or was murdered. But both the BJP and the CPI-M in Kerala demanded that Tharoor quit the Lok Sabha.

Marxist leader and former Kerala chief minister V.S. Achuthanandan said: “Now with a murder case registered, Tharoor should resign and make himself available for the probe.”

Kerala Bharatiya Janata Party president V. Muraleedharan too asked Tharoor to give up his Lok Sabha seat. “The Congress should apologize for fielding him (in the Lok Sabha polls).”

The Delhi Police got the final medical report from the All India Institute of Medical Sciences (AIIMS) Dec 29. Police sources told IANS the murder case was registered Jan 4.

A special police team has been formed to probe the murder.

Asked why it took almost a year for the final medical report to come, Bassi said the interim report spoke of poisoning but did not say it was an unnatural death.

In a statement at Thiruvananthapuram, Tharoor said he and members of Pushkar’s family wanted access to all information related to his wife’s death.

“I am anxious to see that this case is investigated thoroughly, and (I) assure the police my full cooperation.

“Although we never thought of any foul play in the death of my wife, we all want a comprehensive investigation and … unvarnished truth.”

A later autopsy report in July put the number of injury marks at 15. All the injuries were caused by blunt forces except one which was an injection mark.

Later, Sudhir Kumar Gupta, who headed the forensic team in AIIMS, alleged that he was pressured to show that Pushkar’s death was natural.

The AIIMS denied the claim. Gupta was later moved out of his post.

Tharoor retained the Thiruvananthapuram Lok Sabha seat with his margin of victory dropping from close to a lakh in 2009 to around 15,000 votes. The BJP took the second spot.

Tharoor was later named by Prime Minister Narendra Modi as one of the ambassadors of his Clean India campaign. After Tharoor praised the drive, the Congress dropped him as one of its official spokespersons.