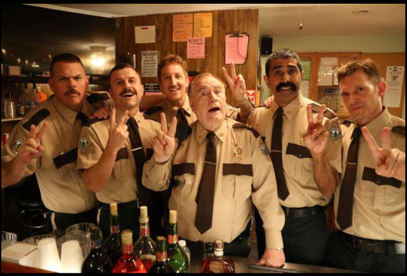 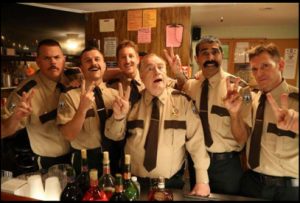 Poor Justin Trudeau. As if the PM doesn’t have enough problems with the Kinder Morgan fiasco now he needs to deal with the fallout of the hilarity brought to light in Super Troopers 2. Fresh fodder from the braintrusts at Broken Lizard and Fox Searchlight this second comical instalment takes off where the first classic from 17 years ago left off. Sort of. Check out the insanity of it all at the International Village Cinemas and other Cineplex Cinemas around B.C.

It’s all about land. When the U.S. Decides to annex part of sedate Canada All bets are off. Sent down to of all places Quebec are a motley crew of once upon a time top flight. Vermont state troopers out for redemption. Once on Canadian soil the writers have a field day skewering both Canadian and American stereotypes with reckless abandon.

Jokes done in Good taste come fast and furious in This low-level howler. Not as good as the original Super Troopers 2 will delight fans of the original. Back for mayhem are most of the original cast and the chemistry is still there. Timely and relevant the film also has some key cameos by well-known American actors who all seem to be enjoying poking fun of themselves and going against type.

Folks looking for a quirky crazy romp will be in good company at Super Troopers 2.