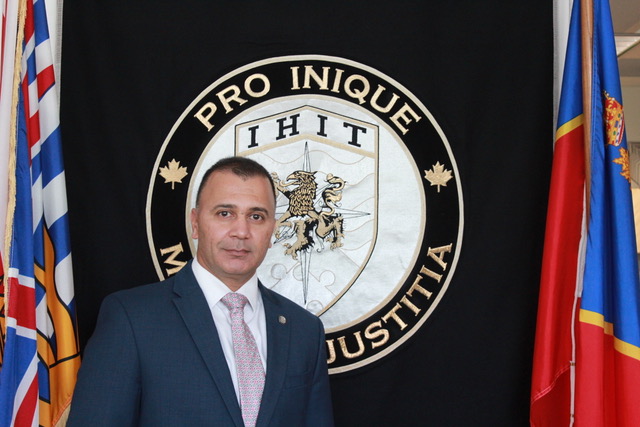 Vancouver: As a 15-year-old immigrant to Canada, Superintendent Dave Chauhan never imagined he’d be leading the largest homicide investigation team in the country.

But that’s exactly where Supt. Chauhan finds himself, as the new Officer-in-Charge of the Integrated Homicide Investigation Team (IHIT). He replaces outgoing Superintendent Donna Richardson, retiring after serving 30 years with distinction, finishing her career as head of IHIT since 2016.

Supt. Chauhan’s position places him at the front of a multi-jurisdictional team of investigators, analysts and civilians who operate from the BC RCMP’s headquarters at Green Timbers in Surrey. The team includes police officers from the RCMP, Abbotsford, New Westminster, Port Moody and West Vancouver police departments.

The thought of being an RCMP officer didn’t occur to him when he arrived in Canada in 1985 from the village of Malpur in the Punjab State of India. He spent his first year in Calgary and moved to Ontario where he completed his high school degree. He went on to enroll in a Bachelor of Business Administration Program at Wilfrid Laurier University in Kitchener, Waterloo. It was there he attended a RCMP recruiting event and was drawn to join the RCMP.

He joined the RCMP in March 31, 1991 and was sent to Regina for 6 month training. After completion of his training, he was posted to Prince George Detachment where worked in several sections including General Duty, Traffic Section, Drug Investigation Unit, Property Crime Unit and Serious Crime Unit.
In 2003, he was promoted to Corporal in Prince George North District Major Crime Section providing policing services to communities in that region investigating complex serious crimes. In 2005, he moved with his family to the Lower Mainland to take a posting with BC RCMP’s Major Crime Section – Serious Crime Unit.

While in the Serious Crime Unit, he was instrumental in seeking the extradition of two Canadians wanted in India for the murder of their daughter in India. In 2008, he was promoted to Sergeant and worked in E Division Major Crime Section – Criminal Investigation Unit, in charge of the Provincial DNA Coordination Program where he implemented several programs to enhance the efficiency and effectiveness of the DNA program in the province. In 2013, he returned to the Serious Crime Unit and in 2015 was promoted to Staff Sergeant of Surrey Detachment’s Major Crime Section where he led a number of high profile shooting investigations with successful prosecutions.

In 2017, he was promoted to Inspector and moved to IHIT as the Operations Support Officer. Dave has served IHIT and the public very well in that role and I have every confidence that the abilities and commitment he’s demonstrated throughout his life and career will serve him well as the new OIC, says the Lower Mainland District Commander Assistant Commissioner Stephen Thatcher.

Supt. Chauhan officially takes on his new role today (June 27). My role here will be to ensure we continue to produce top-level police service to all the communities we serve in the Lower Mainland. I am humbled by this honour of leading an expert team of investigators and civilian staff and I look forward to working closely with our RCMP and Municipal Police Partners., says Supt. Chauhan.