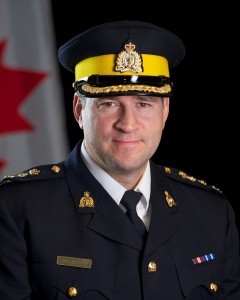 Surrey: Assistant Commissioner Bill Fordy has been named as new Lower Mainland District Commander with the BC RCMP. A/Commr. Fordy will also continue to lead the Surrey RCMP while the City of Surrey and RCMP embark on a process to select the new Officer in Charge for Surrey detachment.

In his new role as the Lower Mainland District Commander, A/Commr. Fordy will oversee the 13 detachments serving 29 communities (including Surrey) in the Lower Mainland District, which stretches from Pemberton to the U.S. border and from the Sunshine Coast to the Coquihalla Highway. Over 2,500 RCMP officers and 900 support staff work in the District, which provides police services to 1.8 million residents. The Commander also oversees the integrated units that work in the District including: Emergency Response Team (ERT), Integrated Forensic Identification Section (IFIS), Integrated Homicide Investigation Team (IHIT), Integrated Police Dog Services (IPDS), and Integrated Collison Analyst and Reconstructionist Services (ICARS).

“I am excited to take on this new position with the BC RCMP where I can continue to enhance public safety and expand the RCMP’s role in community engagement throughout the Lower Mainland District,” says A/Commr. Fordy. “Surrey will always have a special place in my heart and I assure the citizens of Surrey that, during this period of transition, I am committed to ensuring there is continuity and strong leadership at Surrey Detachment.”

A/Commr. Fordy has been the Officer in Charge of Surrey since June 2012. During his tenure at the detachment, he has placed a strong focus on community engagement as well as crime reduction. Under his leadership, Surrey Detachment has increased its presence in the community with the Neighbourhood Safety Campaign, Community Engagement Teams, Bike Unit, and Community Response Unit. In addition, A/Commr. Fordy initiated the detachment’s Citizen/Youth Police Academies, and innovative, multi-agency Surrey Mobilization and Resiliency Table (SMART).

“Assistant Commissioner Bill Fordy brings a great deal of police experience and leadership to the Lower Mainland District team,” says Deputy Commissioner Craig Callens, Commanding Officer of the RCMP in British Columbia. “I look forward to working with him as we build upon the integrated and collaborative efforts underway within the Lower Mainland, while also expanding our initiatives to address the borderless crimes within the region.”

As the City of Surrey has grown over the past four years, A/Commr. Fordy expanded the Surrey RCMP’s Diversity Unit, Domestic Violence Unit, and Youth Unit in response to the changing needs of the city. He also brought an unprecedented 100 new police officers to the detachment over the past year.