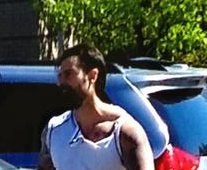 Surrey: Surrey RCMP is investigating a serious assault that occurred in Newton and is asking for the public’s help identifying the suspect.

The suspect’s vehicle is described as a grey Mazda 3 hatchback.

The Surrey RCMP’s General Investigations Unit is leading this investigation.  Police believe given the large area of this incident, time of day, and busy location, that there are several more witnesses that have not come forward yet.  Police are asking any witnesses to this event, anyone who may recognize the suspect, or persons that may have photos or video of this incident, to please call the Surrey RCMP.

“What started as a simple traffic incident quickly escalated into a life threatening situation for the victim,” says Corporal Scotty Schumann.  “When faced with a “road rage” incident, stay calm and call Police when it’s safe and you’re able to pull over.”