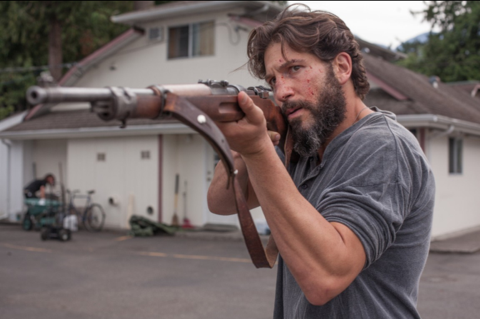 Bad things can happen to good people. Worse things can happen to bad people. See a simple crime spiral out of control in Sweet Virginia. Check that – make it a bad crime leading to more carnage in not so sweet Virginia. Either way folks looking for a slow building tension driven death pact will find it on view at select Cineplex Theatres around B.C.

Elevation Pictures used Canadian content to good advantage as we are privy to a wrong woman seeking revenge. Never try to cheat on a lady (or man, for that matter). Whether in real life or in the movies there is no telling how far a wronged one will go to get revenge. Police know all too well that domestic disputes and crimes of passion often lead to confrontation, chaos and even death.

Small town lady Lila suspects her husband is playing around so employs Elwood, a hired gun, to settle the score. Cast as the victim Imogen Poots plays the wronged woman well while the moody and temperamental Christopher Abbott gives off a chilling portrait of a pent-up killer whose idea of self-control is a bit wanting.

Almost from the offset this employer/employee relationship seems destined for failure. Apart from this liaison another new friendship figures prominently in Sweet Virginia when nice hotel owner Sam forges a special bond with Elwood. Nice in all respects Jon Bernthal seems to cast a long shadow of reason on this killer only he too falls prey to a series of events that bring him into direct conflict with a series of deadly encounters.

Hope British Columbia is a suitable stand-in for Virginia in this minor melodrama. This city fits the part with a good small-town atmosphere. Too much about to scare you music takes away from the full impact of those bad encounters about to occur. So, the imminent danger gets muted as a result of that seeing musical accompaniment. Less is more, and that lesson is not learned here.

Good marks go to the individual characters and solid overall performances. Too bad the overall script couldn’t have been just a tad more surprising and eventful.