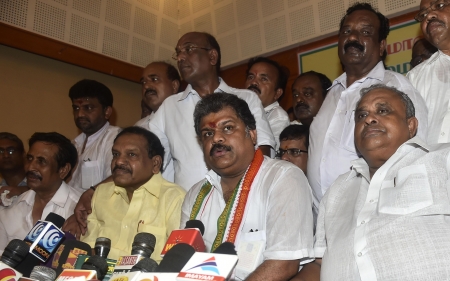 Chennai: Barely six months after it was routed in the Lok Sabha polls, the Congress in Tamil Nadu split Monday with senior leader G.K. Vasan announcing his decision to float a new party. The Congress, however, said it has not received any letter of resignation from Vasan and he was “expelled” from the party Monday for anti-party activities.

Vasan’s exit has come at a time when the Congress is battling the odds following its debacle in the general elections.

The party has lost allies in Maharashtra and Jharkhand and is yet to come up with a plan of action for its revival. Some of its leaders in Haryana joined the Bharatiya Janata Party (BJP) ahead of the assembly polls.

Vasan, a minister in the United Progressive Alliance government, told the media: “The people are looking for an alternative. We want to give an alternative in Tamil Nadu.”

Son of veteran Congress leader the late G.K. Moopanar, Vasan told the media that the new party’s name and flag would be made public at a conference in Trichy this month.

“Steps will be taken to register the party with the Election Commission,” he said.

Several leaders of the Congress in Tamil Nadu, including Peter Alphonse and B.S. Gnanadesikan, have joined Vasan.

Vasan said the Congress leadership did not act as per “our expectations” and so a Congress government could not be formed in the state.

The Congress has been out of power in Tamil Nadu since 1967. For years, it allied with the AIADMK or the DMK but is now widely seen as an also-ran in the state.

“We will give preference to the problems faced by the state,” Vasan said, indicating his party would have a regional focus.

The new party would follow the path laid down by Moopanar and the late Congress leader K. Kamaraj, a former Tamil Nadu chief minister whose name is synonymous with good governance in the state.

Tamil Nadu Congress chief E.V.K.S. Elangovan told reporters that the party will not be affected by Vasan’s exit.

His departure was being speculated even prior to the Lok Sabha polls in May, as he reportedly became disenchanted after his supporters were sidelined in the party.

Vasan’s decision not to contest the general elections was not taken kindly by the party leadership.

Congress spokesperson Ajay Kumar said in New Delhi that Vasan was expelled for his remarks against the party leadership.

Asked if the party was getting weak due resignation of party leaders, Kumar said that such things happen in the life of a political party and the Congress will be strengthened wherever it is found to be weak.

The Congress was routed in all 39 Lok Sabha constituencies in Tamil Nadu — and also in the lone Puducherry constituency.

The break-up was firmed up after another party leader, Gnanadesikan, resigned his post Oct 30 after accusing the high command of not consulting the state unit on key issues.

Gnanadesikan also said that former finance minister P. Chidambaram had not visited the party office for three months and held meetings with some party colleagues on his own.