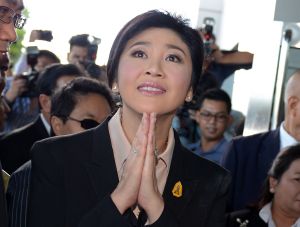 Yingluck at the first hearing of the trial, packed with hundreds of supporters, pleaded not guilty to all charges.

The court ruled that the former prime minister cannot leave the country without permission and must appear, unless a valid reason is provided, at the hearings of the trial on July 21 and July 28.

Yingluck, the prime minister from 2011 to 2014, implemented a subsidy programme to buy grain from farmers at rates above the market price.

Yingluck’s government stored the rice hoping that prices would go up, however it only led to a devaluation of the grain in the international market, while Thailand lost its position as the world’s largest rice exporter.

According to the anti-corruption commission, $18.3 billion was lost, resulting in delayed payments to farmers.

In January, the Thai National Assembly, handpicked by the military junta, banned Yingluck from political activity for five years after accusing her of negligence in the subsidy programme.

Twenty-one others have been accused of corruption by the public prosecutor in relation to the government plan, and they could face life imprisonment and million-dollar fines if found guilty, according to the Bangkok Post.

Those accused include former minister of commerce Boonsong Teriyapirom, two other members of Yingluck’s government, three officials and 15 businessmen, one of whom has already been sentenced to six years in jail for embezzling 20,000 tonnes of rice.

Yingluck was forced to resign last May by the Constitutional Court, which accused her of abuse of power, just two weeks before the military took power in a coup.