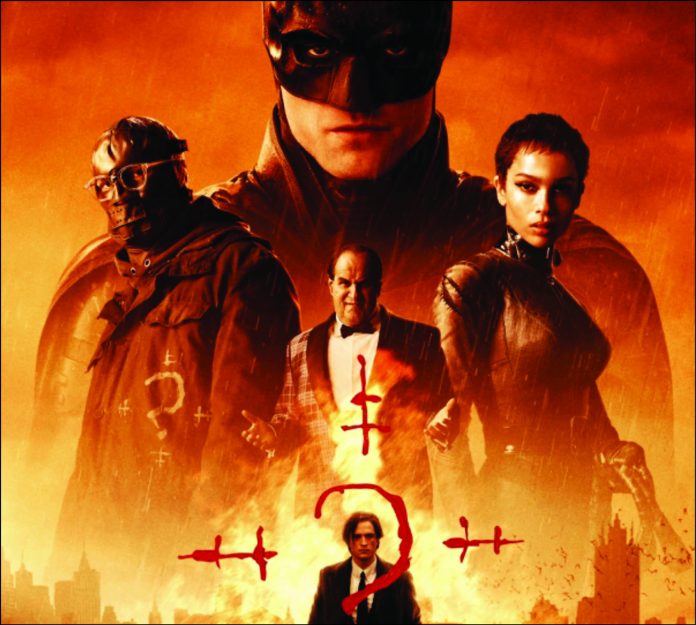 Soaring to new heights is The Batman. Warner Brothers hits the mark with this snappy DC comic book for grown-ups colossal adventure now causing commotion of a good kind at Cineplex Cinemas and Landmark Theatres across B.C.q
Original comic creator Bob Kane would be proud of this almost three hour adventure. Both fan boys/girls and non-supporters of the Caped Crusader will come to like this sharp scripted story. And believe it or not teen heart throb Robert Pattinson (Twilight) comes on strong and then some in a total transformation as a young Bruce Wayne and menacing Batman.
Forget about the classic comical fun from Adam West’s mid 1960s ABC hit television series. Heed the bat signal in the sky as Gotham City once again comes under the spell of an evil bad guy or two. Aided and abetted by a sexy no nonsense Catwoman the pair cut quite the swathe be it attending society galas or tangling with the dark underworld. Zoey Kravitz (Mad Max: Fury Road) is terrific as the high kicking foxy babe who puts Halle Berry’s rendition to utter shame.
Full of excitement and suspense with pacing that never falters and keeps you on edge throughout it’s almost three hour journey The Batman rocks. A grueling dark atmosphere perfectly fits the tone of this exhilarating tale of good versus evil. Great villains with a rivalry of sorts between the Penguin and utterly insane Riddler serves up a tasty soufflé of mad mayhem on all fronts.
Suit up for some super hero fun that focuses on the internal angst and paranoia suffered by a closet hero in the making and a classic monster of a villain. Zowie!