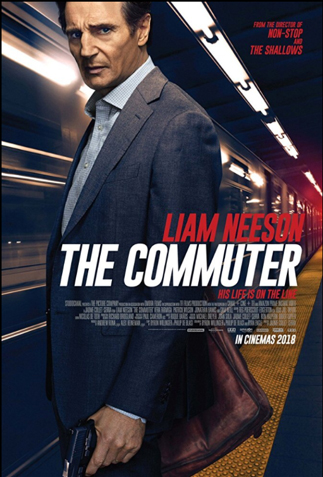 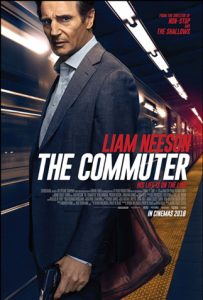 Tired of slow-moving non-thinking movies? Put yourself at ease as a mild-mannered chap lets his inner self take control in the thrilling The Commuter. Start your New Year on a high as pandemonium turns a seemingly ordinary commuter rail trip into a living hell. Go with the flow as the tension builds in this dynamite thriller from VVS Films heading on a collision course for lucky seat-goers at Cineplex Cinemas across B.C.

Dependable is the best way to describe Michael MacCauley. A hard-working work ethic is brilliantly displayed by Liam Neeson (Taken). Surprises aren’t part of the DNA for this busy insurance man who also enjoys a wonderful home life with a loving wife and two sons one en route to college.

Typical family concerns seem not out of the ordinary. However, a work shift sees Michael a bit on edge. Things come to a head in a normal trip home where a chance encounter with a fellow passenger sets off a chain of events second to none. Nothing on this train is as it appears and before he knows it Michael is trapped in a nest of high stakes intrigue with a band of criminals out for blood and no one knowing how it will all end.

Fret not cinema-goers. With Liam Neeson on board chances are he will somehow figure a way out of a death trap. Yes, there is a touch of in believability to parts of the story but who cares? It’s still a lot of fun not knowing what’s coming next and who are real bad guys/gals. Some super charged fights, elements of conspiracies and a truly likeable leading man pushed to the limit yet still projecting an sure of control and credibility make The Commuter a trip worth taking.