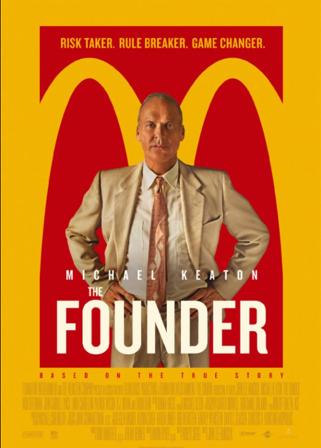 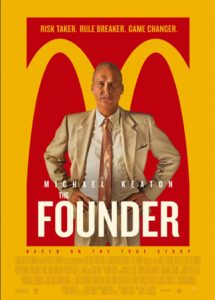 You are what you eat. See history in the making with The Founder. Director John Hancock traces the rise and fall and rise of a one of a kind entrepreneur most of us have come to know first hand. Go down to the International Village Cinemas and your local Cineplex auditorium to take in this Elevation Pictures film and perhaps afterwards pig out on a Big Mac.

Off to 1954 we go as we accompany an Illinois salesman called Ray Kroc trying to hawk Milk shake machines.  Spot on is the portrayal by Michael Keaton (Spotlight) of the man who would essentially turn McDonald’s into a household name and worldwide phenomenon. A stroke of luck sends Kroc off to California in his beat-up Plymouth Belvedere and the rest, as they say, is history.

How Kroc uses his fast-talking pitch and apparent sincerity to weasel his way into a state of the art new concept hamburger stand owned by the two McDonald brothers is classic. Engaging throughout is Kroc’s determination to seal the deal and essentially steal the dream of two backwater hicks who have no idea how to play in the big leagues.

Smart and full of style The Founder takes us down memory lane and does a very good job charting one man’s drive and determination to take a small-town idea and turn into a national and now global sensation.  What a good cast and fitting tribute to a giant of the business world and how Ray Kroc truly changed how we eat – for better or worse.