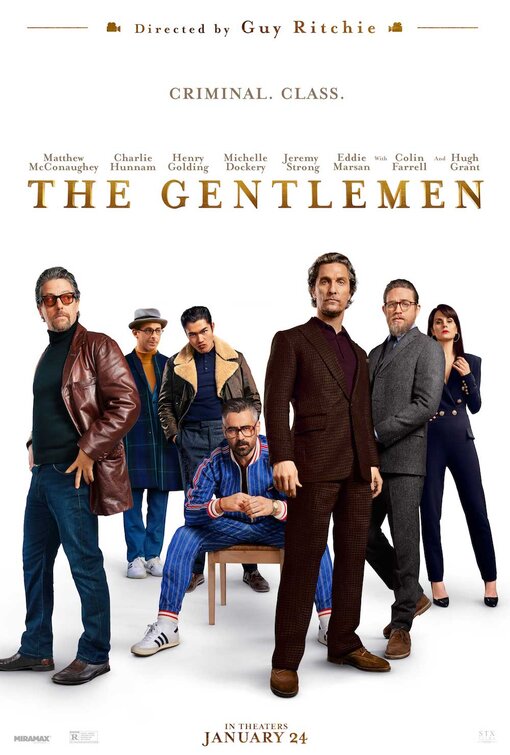 Aces High!
High stakes are on the table in VVS’s The Gentlemen. Good news come early as director Guy Ritchie (Lock, Stock and Two Smoking Barrels) presents a dazzling crime caper. Exuberant performances dominate this snazzy tale of two crime czars going at each other. England will never be the same. Get in on the fun at Cineplex Cinemas and Landmark Theatres around B.C.
Academy Award winning Matthew McConnaughey (The Lincoln Lawyer) slyly portrays a leading crime figure operating with immunity in England. Success breeds competition and in the world of crime blood will be spilt. Not gratuitous violence mind you.
Superb writing that’s very witty sees The Gentlemen lead off with a hard to recognize Hugh Grant (Four Weddings and a Funeral) out to feather his own nest as a player in the. Underworld. With an assortment of murky competitors, partners and various also-rans viewers are taken on a wild  goose chase with the prize being inheriting control of the world’s most coveted cash cow.
Surprising performances by the likes of rising star Henry Golding ( Crazy Rich Asians) and Colin Farrell (Further enhance the unpredictable nature of this hilariously unworldly story that keeps you on edge throughout. And let’s not forget a dynamic if not restrained outing by Charlie Hunnam (Pacific Rim).
Smart, stylish and full of fun The Gentlemen turns out to be a rollicking Royal time at the cinemas if you like crime stories done  tongue in cheek with flair.